"Should we value extremism?" 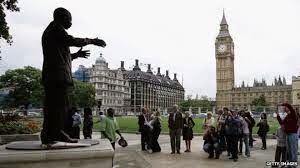 Watching Mark Easton's BBC News at Six report on the Conservative government's plans to introduce banning orders for extremist organisations who use hate speech in public places, but whose activities fall short of it being proscribed as a terror group, it was very hard to escape the conclusion that Mark Easton wasn't keen on them.

Except for a clip of Theresa May, everything Mark said was from the 'anti' side.

We got him arguing that it's hard to define extremism, and that Gandhi and Nelson Mandela and Winston Churchill might have been caught out by such legislation.

We got him interviewing students at the LSE who echoed his doubts about defining extremism and who feared that LSE's Occupy movement might have fallen foul of such legislation.

And we heard from one Anjem Choudary - yes, Anjem Choudary! - saying how wrong it was that the government was cracking down on free speech.

(Frankly, choosing to put Choudary on the BBC News at Six was taking the piss, wasn't it?)

Mark Easton has also publised a blog post on the same theme, using the headline that heads this very post, "Should we value extremism?".

Instead of quoting from that though, I think I'll give the free speech of some of his top-rated readers an airing. Here they, starting with the highest-rated comment:

11. Posted by Shaunie Babes, 6 hours ago
"What would Churchill, Gandhi or Mandela think?"
Actually Churchill and Gandhi's views on Islam are well known, but I doubt the BBC will let me repeat them

6. Posted by Davey Trasker, 6 hours ago
Few days after the election and its open season on the new government for Mark Easton. How can the BBC even pretend to be unbiased? Thankfully these hand wringing Labour Party press releases will be a thing of the past when the licence fee gravy train comes to a halt next year.

18. Posted by Fetch A Cloth, 6 hours ago
Less than a week since the election and the BBC is already attacking the new Government at every opportunity. At least make some attempt to disguise your blatant left-wing bias. Go on, at least try.

14. Posted by imemomeme, 6 hours ago
''What would Churchill, Gandhi or Mandela think?''
They would probably think you don't know what you are talking about.

2. Posted by JUANCOLINA, 6 hours ago
It is one thing to legislate against activities which can be demonstrated to incite violence or hatred. Quite another to pass a law that can silence anyone who the government thinks has "dangerous views" ---- Who the hell is suggesting that - apart from you? We know who is doing the inciting.

8. Posted by fishinmad, 6 hours ago
Roll on the review of the TV tax..........
If extremism is so OK with Mr Easton maybe we can expect him to be promoting BBC interviews with representatives from EDL, BNP, maybe the KKK to add a bit of international flavour? Maybe a holocaust denier or two?
Nah, thought not. Yep, as #6 Davey Trasker said, this was another hand wringing Labour party press release, can't wait to see an end to them

25. Posted by Raskilnikov, 6 hours ago
How utterly absurd, this story, trying to compare Islamic terrorists with Mandela is a great example of why the licence fee should be stopped immediately, too many journalists with odd far left views being payed to write nonsense.

19. Posted by MarkyMark, 6 hours ago
Disgusting article by the bbc and their ultra left wing views are showing. They are not even close to labour anymore, they are more aligned with the ultra left wing anarchists. Be an apologist for terrorists when you are a private company not when you are paid for and owned by the public.

16. Posted by eljp, 6 hours ago
Wow, so much for BBC impartiality!
This is one suggestion from the government to try to tackle the problem of extremism, which like anything could be open to abuse and misuse.
If it is such a bad idea, do you have a better suggestion Mr Easton?
It's very easy to criticise...

12. Posted by Skiguru, 6 hours ago
It's regretful that in an attempt to combat a clearly defined and identifiable foe, in the form of islamic hate preachers, the debate has to be expanded to all forms of extreme speech.
The only reason this legislation is being proposed is because we have an ideology that is endorsing and directly leading to extreme acts of inhumanity. The govt needs to be more specific, but that wouldn't be PC.

29. Posted by Sebastian, 6 hours ago
The comparison of extreme radical Islamists with Winston Churchill is ugly.
The quote has been DELIBERATELY taken out of context. Churchill was saying democracy is the greatest system of government. HOW CAN THAT BE EXTREME?
The intellectual dishonesty of the author claiming a very pro-democratic statement is anti-democratic means there is no need to consider any other word of this drivel.

31. Posted by GCP, 6 hours ago
Another typical use of the Trollope ploy by the BBC.
Again deliberately misinterpreting a proposal in order to show someone in the worst conceivable light. Poor journalism. It is clear what the Government are trying to tackle. People should focus on how best to make it work whilst protecting the rights to free speech and privacy. Constructive suggestions would be appreciated.