While I was ‘out-of-the-office’ I was mildly staggered to hear the BBC announcing that Amnesty International had issued a critical statement about Hamas. “Gaza: Hamas killed and tortured, says Amnesty” No scare quotes, even! 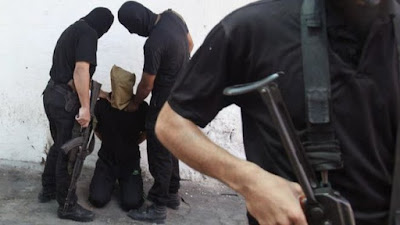 Amnesty gave their report the title: “Strangling Necks”, which was a bit weird.
When I had finished reeling, I started to think.

Amnesty International, comprising some staunch, nay, virulent defenders of radical Islam, is renowned for being harshly critical of Israel -  why should such an outfit suddenly decide, out of the blue,  to behave as if it had turned against everything it had previously held dear?

Even worse, how could it be that one solitary statement from the aforesaid outfit could then be held up triumphantly by pro-Israel proponents and bloggers as evidence of Hamas’s depravity, as if Amnesty had experienced some belated enlightenment, perhaps connected to the widespread exposure of the horrors of Islamic State? In other words, is this the long-awaited absolution of Israel by a reformed Amnesty International? Not very likely, is it.

Previous statements from Amnesty International have condemned Israel for every conceivable human rights violation that mankind could manufacture, whereupon we pro-Israel ‘misfits’ have rightly and routinely poo-poohed them as biased rubbish.

(One could equally ask such questions of the BBC. After all, the BBC sees Middle Eastern affairs through an Amnesty-like prism. Why did the BBC headline Amnesty International’s statement and not bury it as they happily do with unhelpful stories on other occasions?)

Doesn’t make sense, does it? a.) That Amnesty International should suddenly ‘notice’ what has been going on all along, when hitherto they had turned a blind eye, and b.), that everyone should guilelessly applaud them and turn a blind eye to their previous, dubious record.

Well, maybe we shouldn’t, and some of us haven’t.

I had a look at Amnesty’s actual statement on the A I website. “Strangling Necks.” It struck me that Amnesty still considers Gaza “occupied by Israel”; like 'Elder of Ziyon', I read footnote 26.

“However, it is interesting to see how Amnesty talks about Israel in this report.
For starters, Amnesty must hang onto the illusion that Israel still occupies Gaza, even though they know very well that under international law, occupiers are responsible for maintaining the legal system of the occupied and Israel cannot do that. So it writes nonsensical passages like this:”

(then a quote from nonsensical passage written in obscure legalese, then:)

“Amnesty is creating a legal framework that simply doesn't exist to ensure that Israel is considered an "occupier" of territory that Amnesty knows Israel doesn't have effective control over.”
[...]“At the end of the report, though, Amnesty reveals a possible reason why it issued this report ostensibly against Hamas - in order to pressure Israel to do what Amnesty wants!”

Read all of Elder’s piece, and you’ll see why this apparent change of heart isn’t something for us to gloat over, by any stretch of the imagination.
Recognising atrocities committed by Hamas, which, due to modern communications very few people can hardly be completely unaware of,  looks like a preemptive face-saver which will serve to reestablish Amnesty’s lost credibility, (through a series of one-sided human rights related announcements) before normal Israel-bashing service is once again resumed.

As far as the BBC is concerned, that normal service has already begun.  H/T BBC Watch

“Hamas exercises undisputed authority within Gaza, and Amnesty’s powerful report depicts an organisation responding to the relentless pressure of Israeli military operations with a brutal campaign against its own enemies within.”

Responding? How else would any hard-done-by organisation exercise its authority in response to 'pressure' from the enemy, other than by ‘killing and torturing’ one’s own citizens, whether 'suspected of collaborating with the enemy' or not?  Is that what Connolly is saying?

Notwithstanding the fact that any pressure coming from Israel was and is purely retaliatory. In other words, no provocation = no pressure.

It seems that even the depravity of Hamas cannot deflect Amnesty International or the BBC from their singular, particular  goal, the delegitimisation of Israel.