The Madness of King Ludwig 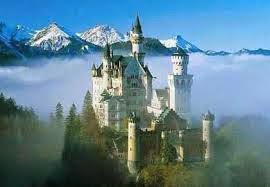 This is mainly a blog about BBC bias, but our sub-title is "...and any other matters that take our fancy", which gives us the freedom to digress from time to time.

Unfortunately, my focus on BBC bias matters usually makes me forget to post stuff on the "any other matters" front. Or even to watch stuff I might actually enjoy but which isn't liable to be full of BBC bias.

For example, until this week, I'd completely missed a fabulous piece of BBC broadcasting first broadcast in 2013. (A repeat broadcast on BBC Four rescued me).

It was hosted by a presenter I've mentioned before, in a snide 'aside':

But, despite Dan's continued whisperin', I loved it and loved his presentation of it, and I'd recommend you to watch it - if you've got a spare hour to treat yourself.

Having been an on-and-off Wagnerian for some 25 years, Wagner's pet monarch Ludwig II of Bavaria has long intrigued me, but, until watching this programme, I didn't know the half of it.

I knew about the Disney-inspiring Neuschwanstein ('New Swan on the Rock') castle, but I hadn't a clue about the Linderhof, with its fantastic stage-set-like Tannhauser-inspired Venusberg grotto complete with fake stalactites and shell-like boat for the King to ride in. Or its companion Moroccan House, purchased at the Paris World Fair in 1878, built in the manner of an Islamic mosque. (Fancy Germanism and Islam coming together, eh?) Or about the near-powerless king's Herrenchiemsee palace, half-built (before his mysterious death) in the manner of Louis XIV of France's Versailles, following the proclamation of the Prussian-run Second German Reich at Versailles itself in 1871, after the Franco-Prussian War and Bavaria's immediate relegation to a vassal state of the new Germany - a palace full of the most beautiful Meissen ware.

The dream-world of Ludwig, nervously yet confidently detached from the politics and people who surrounded him, was fascinatingly conveyed in all its self-contradicting complexity.

And, I don't think I'm merely succumbing to BBC Gramscian propaganda in reporting, alongside my affectionate gawping at the 'mad' king's marvels, that I did genuinely feel struck by quite how long the Bavarians - and, in transpired, after German unification, even Bismarck-run Germany - allowed the fantasy-dwelling 'Swan King' to live out his gorgeously extravagant fantasies at the public's expense - one man, indulged for 22 years.

But, as the programme made clear, those extravagant fantasies of Ludwig's have been more than repaid. His fantasy castles became money-making tourist magnets almost from the moment of his death. Bavaria has dined out on them ever since. And the Bavarians still hold King Ludwig II in affection.