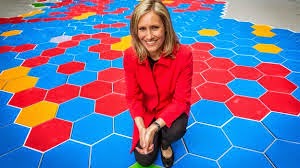 Maybe it's because I was so swept up by a feeling of euphoria on Thursday night/Friday morning but I completely failed to spot what many in the 'BBC bias blogosphere' spotted - that the BBC was in complete mourning for Labour and the Lib Dems and in deep depression about the Conservative victory.

I just didn't see any of that as I was watching and listening. In fact, I remember thinking they were all doing a reasonable job at disguising whatever feelings they had.

I did think though that they were all looking increasingly tired as the night went on - except for Andrew Neil, who seemed as lively at dawn as he had been just after dusk. Even Emily Maitlis lost her lovely glow as the night wore on and by 7 o'clock was looking as pale as a (rather attractive) ghost - something I put down at the time to her having been up all night.

The one bit of obvious bias that I picked up on during the night was a piece of bias of which I thoroughly approved: David Dimbleby's barely disguised glee about George Galloway losing his seat in Baghdad West. DD said GG had been "trounced", and offered him the following epitaph: "Gorgeous George, remembered by many for appearing as a cat on Big Brother". Ha ha!

Lots of other things made me grin that night - and the following morning. Though up all night, I was positively Saddam-like in my indefatigably when it came to watching every second of the election coverage, and when Ed Balls lost to that charming Tory lady in the red dress I suspect I startled my family somewhat by literally leaping around. (I'd taken the day off work in preparation, so my leaping around at around 8.10 in the morning was done in the knowledge that I could keep on leaping around after everyone else had left the house). Like Sue though, my jaw dropped when Nick Robinson paid his remarkable tribute to the sheer niceness and 'misunderstoodiness' of poor, defeated Ed Balls - complete with the tireless Laura K nodding vigorously along in approval. My spirits sank. "Oh, he likes playing the piano", I thought sadly. Then I cheered up again. Ed Balls had lost his seat. Ha ha!

As the morning went on I did recoil somewhat at the harshness and air of glee that inhabited the BBC studio when Nigel Farage just failed to win in Thanet South. However, I was still drunk on euphoria - despite pangs of sadness about Nigel - and BBC bias remained far from my mind.

Dead Ringers on Radio 4, incidentally, had a quite funny take on the Beeb's election night special:


David Dimbleby: Hello, and welcome to seven hours of nothing followed by one hour of something. I'm here in front of a spiral staircase for no reason and Andrew Neil's sitting up there in some bird's nest looking like an overfed crow.

Andrew Neil: That's right, I'm up here, two colours in my tie - which is half as many as in my hair. Speaking of which I'd like to thank the make-up department for doing such a stellar job spray-painting it on. Now we go over to Sophie Raworth who's stood on a big pointless map of the country like a sexy Michael Fish.

Sophie Raworth: Erm, yes, thanks very much Andrew. It's sort of blue, red, yellow, purple. I've absolutely no idea what's going on. I don't know what I did to deserve this. Emily Maitlis is in a nice warm studio in a red cocktail frock and I'm freezing my bosoms off on a giant set of political stickle bricks.

Jeremy Vine: You know join me, Jeremy Vine. A CGI Downing Street. Look at this, wow! Ooh, look at this, I'm on a spaceship, wow! Look at me now, jumping over here, saying things very quickly. Now I'm in Barbados, wow! Now I'm in a giant car park overrun by dinosaurs. Look at this! Scary! Terrifying! Got to get some use out of it. We paid George Lucas £10 million to direct this. David, has anything happened yet?

David Dimbleby: No, not really. Remember, if you prefer you could always switch over to Channel 4 to watch Jeremy Paxman's mid-life crisis or alternatively you could make an adult decision and go to bed.

I didn't make that adult decision, and I don't regret it for a moment. And, yes, poor Sophie did look like a sexy Michael Fish. 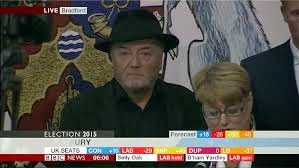 Update: It seems from Rod Liddle's latest Sunday Times piece that Rod's wife had the the same kind of election night as me. Here's a short extract:


My abiding memory of election night will be the incessant, spiteful cackling of my Tory-inclined wife. I thought she was going to do herself a mischief when poor Douglas Alexander’s result was announced, such was her jubilance. I haven’t seen her so delighted since our pet hamster got run over.

We had bought some decent-quality alcohol — four bottles of Morrisons pinot grigio — to toast the departures of politicians we haven’t entirely taken to these past five years. But the evictions came so thick and fast that by the time George Galloway’s defeat was announced we were scouring the cupboards for paint stripper or Tipp-Ex to sniff. I had laid on a whole bunch of snacks — festive finger food — but she was so convulsed with hilarity that they all ended up in the dog. She was comatose and drooling when I tried to wake her for the result from Morley and Outwood, still sniggering away in her sleep. So, no, she wasn’t up for Balls.

In the grand scheme of things Galloway’s defeat was a footnote, a sort of gilding of the lily, a mere bonus prize. But the quote he gave upon being defenestrated (and reported to police for tweeting an exit poll — you doubt there’s a God? Oh, there’s a God all right) was something to cherish. This is what the man said: “The hyena can bounce on the lion’s grave but it can never be a lion. And in any case I am not in my grave.”

Right, glad that’s clear, mate. A spokesman for Britain’s community of hyenas said in response: “What’s all this about bouncing? When have hyenas ever bounced? And if we did bounce, why would we bounce on a lion’s grave? And why would we want to be lions, anyway? Overrated, pompous beasts.”