Though this is a blog that tries as hard as it can - or at least as hard as one man and one woman with families and busy lives can possibly do - to monitor as much of the BBC's output as possible.....and, given how colossal the BBC's output is, that's nowhere near as much as we'd like - to put it mildly!.....we probably miss a heck of a lot of (potential) bias.

Thankfully, plenty of other eyes are out there.

Some of those eyes, however (like us perhaps), see things through their own filters (and biases) and either find things or miss things that we don't see, or that don't interest us - some plausibly, some implausibly.

This latest bout of introspection arises because The Crazy World of Twitter is going absolutely wild this afternoon/evening with furious accusations of BBC bias...

...but those accusations are coming, it seems, almost entirely from those notorious supporters of the SNP known as 'cybernats' - the sort of people who on seeing Jim Naughtie walking down a street in Dundee march towards him and chant in unison, "Delete, delete, delete". (One for Doctor Who fans there.)

The story, reported on the home page of the BBC News website, is that Scottish Labour leader Jim Murphy and Labour-groupie-comedian Eddie Izzard have been rudely heckled - or worse - during a "scuffle" in Glasgow.

The BBC's man-of-the-moment in Scotland, James Cook, paints a grim picture of the scene on Twitter:


James Cook @BBCJamesCook  ·  7h 7 hours ago
Absolute chaos on the streets of Glasgow as Jim Murphy and Eddie Izzard try to be heard over protestors. #ge2015

James Cook @BBCJamesCook  ·  6h 6 hours ago
“Democracy is dead” one of the protestors who shouted down Jim Murphy in Glasgow tells me. #ge2015

James Cook @BBCJamesCook  ·  6h 6 hours ago
More pictures of the scuffles in Glasgow to come if possible. I couldn’t get any as I was watching cameraman @cherlie1′s back.

Nicola Sturgeon may have distanced herself from the anti-Labour protests, but the cybernats are still calling 'bias' on the BBC for reporting what they call a Labour 'stunt' and they are posting images that they say prove the BBC is misreporting/exaggerating the event (or, to put it more bluntly, lying).

The image endlessly being re-tweeted, in response to James's claims of "chaos" is: 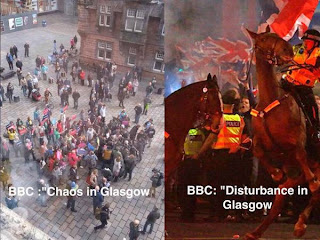 I'm not sure what the second image relates to - but it obviously means a lot to the cybernats. My guess is something to do with the post-referendum violence in Glasgow said to have been carried out by pro-union thugs.

Is that "BBC: Chaos in Glasgow" image a true or a false picture of today's events? Are the BBC over-egging the pudding? Are James Cook and his BBC colleagues covertly campaigning for Scottish Labour?

Well, call me 'an indecisive blogger' if you will but, frankly, I've not got a clue. I've Googled around to try to find out what really happened and yet I've still not got a clue. I rather doubt the BBC are covering for Labour (or covering for the SNP, as I've seen claimed on certain largely English blogs - though the one thing I can be certain about here is that James's tweets certainly weren't doing that!) but, still, I've not really got a clue.

Craig's Final Thought - To summarise: Dunno.
Posted by Craig at 19:09