Oh, for Betsy Murgatroyd's sake, is there no end to the BBC groupthink displayed by BBC WS journalist Steph Hegarty?

She can block whoever she likes on Twitter, but still... 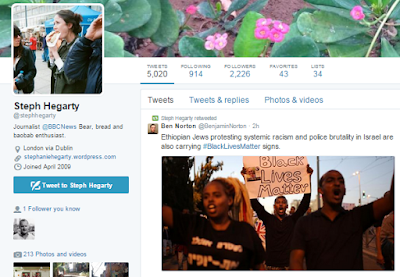 And who's this Ben Norton she's re-tweeting? Well, according to his Mondoweiss profile (yes, that extreme, Israel-bashing Mondoweiss!):

Ben is a freelance writer and journalist. His work has been published in CounterPunch, Electronic Intifada, Common Dreams, ThinkProgress, and ZNet, among other publications. His website can be found at BenNorton.com. Follow him on Twitter at @BenjaminNorton.

Yes, an anti-Israel writer who writes for extreme, Israel-loathing Mondoweiss and the even-less-Israel-friendly Electronic Intifada.

Following on from her earlier Israel-bashing tweets, this is hardly surprising, is it?

She's a real credit to 'BBC impartiality', isn't she?

Update: Here's the full tweet (including its 'parent') she re-tweeted here: