The fates have conspired against me here.

I checked out an old episode of Panorama on iPlayer yesterday - the one where Panorama brought in famous U.S. pollster Nate Silver before the election to answer the question, Who Will Win the Election?

I wanted to check how well Nate did, given how effusive presenter Richard Bacon had been about his astonishing accuracy as a pollster.

The answer is that he was no better or worse than anyone else. If I remember the numbers correctly, he predicted the Conservatives would have 282 seats, Labour 270, the SNP 48, the Lib Dems 24 and UKIP 1. (Well, he got the UKIP figure right!)

I thought I'd post about it this morning but that I'd better just check that those figures are correct first - as I like to be accurate about such things.

Unfortunately overnight the 'watch again' option has been removed from this episode.

With one other exception (an episode about Ebola), every other Panorama edition from the past year is still available to watch again, so the decision to remove the option for this one edition is a very deliberate move on the BBC's part. 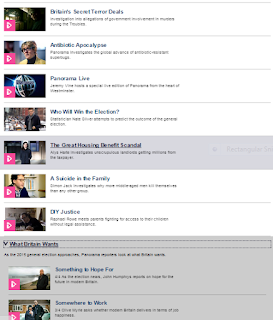 Whose blushes are being spared here? Nate Silver's or the BBC's?

Maybe it's time to send Darragh MacIntyre in to investigate.
Posted by Craig at 08:13