Bias at the BBC World Service

As a teenager (in the '80s) I used to listen to the BBC World Service quite regularly.

(Come to think of it, I also used to listen to Radio Tirana from communist Albania for a laugh. Typical teenager, eh?)

Oddly, I don't do now, and haven't done for years - even though, for most of that time, I helped pay for it.

I've often read on sites where people comment about BBC bias (from Biased BBC to the Telegraph and beyond) that the BBC World Service is actually the place, these days, to hear the BBC in full biased flow (largely our of earshot of British license fee payers).

That new blog favourite Steph Hegarty is a prominent BBC WS reporter and, as we recently discovered, believes that the BBC World Service is a missionary organisation designed to represent the interests of what she sees as "the displaced, the marginalised and the poor", perhaps such BBC critics may have a point.

Frankly, though, I've not monitored it so I can't say.

Still, via a Twitter link, I did listen to a BBC World Service programme today. Hot off the presses, it was their latest History Hour, leading with...as my deepest fears about the BBC WS expected...a classic BBC tale of Palestinian woe told from the side of the Palestinians (and a U.S. journalist) but, very noticeably, not including any input whatsoever from the Israeli side.

The episode is headlined: Siege of The Church of the Nativity.

The image on the programme's website is, I think you will agree, not helpful to Israel... 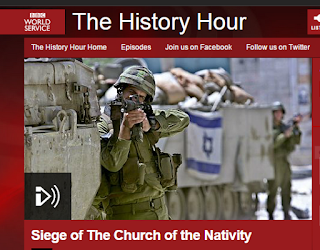 ...and very obviously intended - even if you don't know (or can't remember) anything about the 2002 incident - to help place Israel in the role of the 'bad guy'.

Presenter Max Pearson teed the feature up with the following loaded words:

Ever since the creation of Israel after the Second World War, carved out of land previously inhabited by the Palestinians, there's been tension between Jews and Arabs. This tension is frequently expressed in violence.

The report (by a reporter whose name I just can't decipher) told the story of how Israeli troops entered Bethlehem, going into Manger Square. Their firing sent locals fleeing into the Church of the Nativity for safety. Some 'militants' (unspecified) also fled into the church and a long siege followed, eventually ending with exile of some of those 'militants' after a deal with Israel. Palestinians died, and the American journalist gave her memory cards to a Palestinian priest, suspecting that the nasty Israelis would interrogate her after she got out (having sneaked in with some 'peace activists').

I await BBC Watch's take on this with great interest, as I've no great expertise on this story - to put it mildly. But I've been googling around again and I'm reading Israeli accounts that paint a very different picture to this BBC account - a picture of Palestinian terrorists taking hostages as human shields (in a building many Christians revere as the birthplace of Jesus Christ) and Israel managing to keep casualties down to the barest minimum...

...which is a perspective I, as as listener, most definitely did not get to hear from the BBC World Service here. It was all very one-sided.

Are such things typical of the BBC World Service?
Posted by Craig at 20:18