Sticking with those latest batch of BBC Complaints appeals...

The one on the Patagonian episode of Top Gear appears in this month's offerings.

If you recall, the issue arose because of a confrontation with Argentinian locals arising from the said Argentinians noticing Clarkson and Co's registration plate and not taking a liking to it: 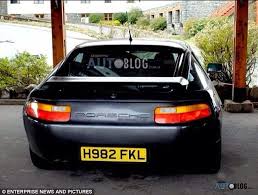 The upper echelons of the BBC's Complaints Tree are experts at crafting po-faced rejections of complaints and complaints appeals (even if they're valid, as many of you are doubtless all too aware), and this one's an absolute gem.

My favourite bits run as follows:

The Head of Editorial Standards, BBC Trust, noted that the Executive had issued, prior to broadcast of the programme, detailed responses explaining that the number plate controversy which occurred during filming in Argentina was the result of an unfortunate coincidence, and the cars were neither chosen for their registration plates, nor were new registration plates substituted for the originals.

To date, there is nothing that we have seen or read since the team returned which supports the view that the number plates in question were deliberately employed, which is in-keeping with what production staff and the presenters have said.

And for once I entirely agree with the BBC bigwigs.