Is the BBC biased in favour of assisted dying? 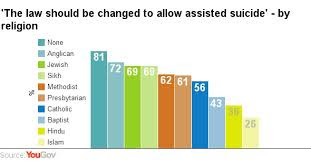 Over at Conservative Woman, Alistair Thompson has written a trenchant article about what he sees as a clear piece of BBC bias.

It concerns the BBC's coverage of the death of Jeffrey Spector (54) at the Swiss Dignitas clinic - i.e. the BBC's reporting of what some call 'assisted dying' and others call 'assisted suicide'.

Alistair is strongly against assisted dying.

I'm not with Alistair on that at all, but his case against the BBC is interesting.

Given this catalogue of horror, you might expect the BBC to present this case in a neutral and non-partisan fashion, but the Corporation, which has acted as the cheerleader for changing the law, could not help itself banging the drum for legal reform.

The BBC 10 O’clock News represented the pinnacle of this one-sided reporting.  The package started badly as BBC’s medical correspondent Fergus Walsh appeared to get giddy with glee as he reported on the details of this man’s sad story, but it got worse.

The whole item continued without a single person from the medical profession, disability right movement, or even from one of the major religions putting a contrary view. That’s right. Not a single person from groups like Care Not Killing, the British Medical Association, any of the royal medical colleges, Association of Palliative Medicine, or the hospice movement took part.

And it not just news programmes that see the BBC push their pro-death propaganda. Increasingly light entertainment and soap-operas use assisted suicide to base some salacious storyline on.

This is an area that a blog like this should, perhaps, be investigating (even though, as I say, it runs against my own beliefs).

Is the BBC cheerleading for changing to law to allow assisted suicide?

I'd hoped to check out Fergus Walsh's News at Ten report but, as the programme is only on the iPlayer for 24 hours, it's vanished forever, leaving not a rack behind. And I can't find it on the BBC website either.

Still, there is a recent article (from three days ago) by Fergus Walsh on the BBC website entitled The Assisted Dying Debate.

The headline is promising, giving hopes that Fergus will give a balanced flavour of that debate.

Please read it for yourselves though. Even if - like me - you incline towards allowing assisted dying, please judge whether you consider it a balanced article or not.

I'm struggling to see how that's balanced - duly or otherwise. Can you defend it?

Even Feedback's Roger Bolton, usually no slouch when it comes to defending the BBC against charges of bias, has admitted that the BBC's "liberal secular humanist" tends to make the BBC behave in a biased way when it comes to social issues like this, relegating the 'socially conservative' counter-arguments to the sidelines (due to not understanding/being able to empathise with them).

Is this another example of that?
Posted by Craig at 16:52