Just an update on a post from last July: 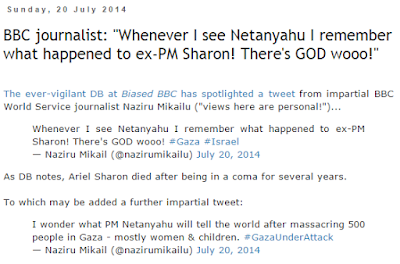 A few days later DB posted the following at Biased-BBC:

A commenter at Biased-BBC has now posted a reply he received from the BBC World Service's complaints department to a complaint he put in about Naziru Mikailu's tweets (though it's unclear when it was received). It's worth sharing:

Thank you for your email in which highlight a tweet by a member of our staff, Naziru Mikailu, about the Israeli Prime Minister Benyamin Netanyahu in the context of the present escalation of the conflict in the Middle East.
Naziru has contravened the BBC’s Social Media guidelines, which require that our staff – even when using their personal social media accounts – do not compromise the BBC’s editorial guidelines and reputation for impartial, accurate and balanced reporting. While being encouraged to use social media, our staff members are expected to behave in a way that is consistent with the BBC’s editorial values and policies.
That was evidently not the case on this occasion. We apologise that this has occurred and risked our organisation being brought into disrepute. We have arranged for the tweet to be removed and are taking disciplinary action against Naziru Mikailu.
I hope the above goes some way in reassuring you just how seriously the BBC World Service takes its integrity and commitment to accuracy and impartiality at all times, and particularly in regards to conflicts as complex and emotive as the present violence in Israel and Gaza. In that context, and as you yourself claim that the BBC is in general biased against Israel, I’ve added a few links to our recent output and reports about the events in the Middle East, the wider background of the conflict and the profile of Israeli Prime Minister Benyamin Netanyahu… [not included in the original comment]

We have no way of knowing what that disciplinary action involved, of course - and another commenter quipped, 'They probably gave Mr Mikailu what we used to call “a damned good letting off”' - but looking at Naziru's still-busy Twitter feed it's clear that he's no longer tweeting anything remotely controversial. So he does appear to have learned his lesson after all.

Still, that re-statement of the BBC's Social Media Guidelines makes it clear that many of the tweets we've posted here - and that DB has posted at Biased-BBC - must surely be incompatible with the BBC's guidance.

More complaints to the BBC are needed.
Posted by Craig at 15:57