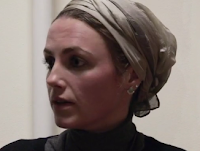 Well, it was genuinely moving (and, thanks to all the sad music and other such familiar stand-bys, clearly meant to be so), and it was also surprising fair in parts.

There were admissions later on (from Serbs - one 'bad', one 'good') that everything wasn't quite so black and white as the programme had previously suggested (though there is undoubtedly a good deal of blackness here) but...

...the programme was also heavily infiltrated with strongly-hinted-at messages and outright statements (not so much from the lips of Myriam herself though but from others [including the head of the charity at the heart of the programme]) that Muslims in the multi-cultural UK, facing "racism" as they do (apparently), might somehow face the same fate as the Muslims of multi-cultural Bosnia - if we aren't careful. ("It could happen here").

Most of the charming youngsters involved in the programme seemed to buy into that alarmist message too.

The sense of grievance built up by Myriam's youngsters as they toured the region - especially the young Muslim lad, Abdul, who got very passionate at times (and whose bizarre point about Muslim suffering being ignored by the British media wasn't even challenged) - seemed appropriate but was also rather disturbing.

Given that some people think that the present-day ultra-violent jihadi tsunami really began in Bosnia (something that wasn't mentioned here), the BBC ought to have trodden very carefully. I smelled suicide bombers watching, and their many-and-various apologists lurking in the wings.

And though the programme mentioned the fact that many British Muslims felt upset about what happened in Bosnia, there was far too little about the West's role in ending the Bosnian War (despite the involvement of the daughter of Col. Bob Stewart), and nothing about the West's heavy anti-Serb military action over Kosovo - both to help Muslims...which might have provided a truthful counter-narrative. Update (h/t Sue): The Daily Telegraph published a very positive review of this programme. The review's below-the-line comments, in contrast, gave it a thorough going-over.
Posted by Craig at 21:31