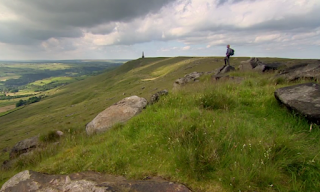 Yes, a left-wing journalist was its early hero and there were messages about the need to tackle climate change (for those who prefer their blogs about BBC bias to actually be about BBC bias), but I liked it a lot and will be watching the rest of the series. And the BBC's cameramen worked wonders in bringing out the staggering beauty of the Pennines.

I could range widely and deeply over the subject but instead I'll just take the easy option, pick a minor point and run with it sarcastically (you know it makes sense!)...

...namely the literary bit where the ever-enthusiastic Paul Rose explored the roots of Ted Hughes in the South Pennines and introduced us in the process to a real character (of the kind that these types of programme thrive on) - actor, director and proud Yorkshireman Barry Rutter. Barry then gave us a delightful rendition of a Ted Hughes poem about a football match in the area. Hughes was a Heptonstall man, and the virtues of present-day Heptonstall were then celebrated.

That poem, however, might not have been entirely typical of Ted Hughes's poems about the place. In the poem called Heptonstall he begins by calling it a "black village of gravestones" and ends by saying: "Only the rain never tires".... 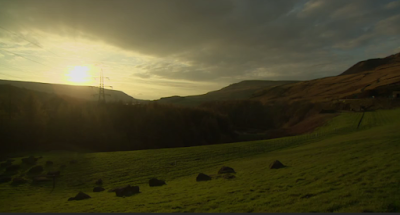