Two sides to every story

“Good News!” said the announcer this morning. “An historic deal has been stricken! “ Well, not exactly, but the announcement that the US and co have reached an agreement with Iran seemed to have been framed as though this was jolly good news.

As  a supporter of Israel, I’m inclined to take the view that it is no such thing, but seeing as I am only a relatively ill-informed member of the public I’ll leave it at that for now.

When they said the deal was “to curb Iran’s nuclear programme”  I thought, yeah, but I bet they ain’t reporting it like that in Tehran. They’ll be calling it a deal to lift sanctions.

Which brings me to the theme 'two sides to every story'. Like the case of the Arab Spring, which caused euphoria within the ranks of the BBC, but not so much amongst people who predicted a disastrous outcome.

But that wasn’t what I thought of first. That was the infamous interview on Channel 4 with Krishnan Guru-Murthy and Jeremy Corbyn.  I first saw it on the Spectator website, then on Harry’s Place, where the gist of the reaction was astonishment that some of Corbyn’s supporters thought he’d ‘won’.

I was surprised that Krishnan took this tone, as the Channel 4 crew seem ideologically inclined, on the whole, to be in synch with the hard left, and accordingly, sympathetic to Israel’s enemies, Hamas and Hezbollah. But never mind, Krishnan was conducting an adversarial interview, and adversarial he was gonna be.

As Sarah AB noted, he never even mentioned Raed Salah. Instead he insisted on a repetitive Paxo-style harangue about the meaning of the word “friend”.

Corbyn became so rattled that he seemed to be about to lean across the desk and smack his tormentor. That was the moment he really really lost it. Imagine him as leader of the Labour party. Or any political leader. His hard-line fans will disagree. 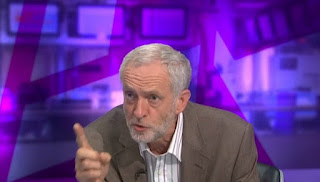 Apparently this incident occurred two months ago, but I only read about it yesterday. I don’t know why. I’m not being very topical here I guess.

The outcome, according to the Daily Mail, was an eight-month detention and training order for breaching a youth rehabilitation order that was imposed on March 8 for GBH and witness intimidation, as well as the assault.”
While most of the btl comments on “Entertainment Daily” applaud the boy for not retaliating, one commenter put the other side of the story.

“Whilst this kind of behaviour disgusts me, If you listen to what she's actually saying, she's implying this guy is a dealer who's been supplying poor quality drugs. She asks him "Where's your weed?" and at the end says "When my bredrens come for a draw, or anyone on this estate comes for a draw, you not giving them dust. You understand? If you're shotting, you're shotting properly, otherwise I'm getting my BLEEP to come and jerk you yeah?" To anybody who doesn't understand British 'street' lingo, this roughly translates to. "When my friends or anybody from this area comes to buy drugs from you, it must be of acceptable quality'. If you're going to deal, you must deal properly or I'll get my BLEEP (friends, family, boyfriend etc) to come and sort you out. Do you understand?" If the guy is in fact a drug dealer, would that change people's reaction towards it? “

He has a point.
And why is this girl form Croydon speaking in Jamaican slang? Am I being like the judge who had to ask who or what are the Beatles?