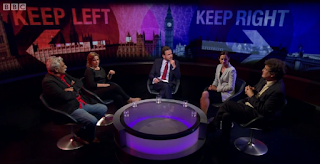 Four other things, following on from that James O'Brien/Newsnight post...

Firstly, the following discussion -  about whether the UK political centre is losing ground to the 'hard' Right and the 'hard' Left, with the Conservatives heading rightwards (according to James O'Brien) and Labour heading leftwards - featured a peculiar balance of opinions.

The two left-wing guests - Rhona Cameron and Tariq Ali - were both 'hard' left-wingers, saying pretty much the same things in different ways [Rhona very loudly, Tariq much more quietly]. The two other guests - Peter Oborne and Annunziata Rees-Mogg - were hardly their equivalents on the Right though. Peter Oborne holds a highly individual set of views which the term "right-wing" doesn't do justice to (as Roy Greenslade notes here) and, as a result, he spent a fair amount of time on Newsnight praising the 'hard' Left and denouncing "neo-liberalism". Until his closing squabble with Rhona Cameron over the present government's record on employment, Peter Oborne had sounded surprisingly close to her and Tariq Ali for a good part of the time.

Secondly, why do Newsnight keep inviting Annunziata Rees-Mogg to appear? (I'm not being rude about her there, just asking a question). And, in a related question, why do Newsnight - and Radio 4's Broadcasting House especially, and much of the rest of the BBC besides - also like to invite her brother, Jacob Rees-Mogg, onto their programmes as their Tory representative? Yes, he's a charming chap and all that, dontchaknow, but just what is it about what the Independent once called "the first family of fogeys" that entices BBC producers and editors to invite them on so often to represent the Conservative Right?

Thirdly, I'm at a loss to work out why certain BBC tweeters seem so enamoured with James O'Brien's skills as a presenter/interviewer (except for the obvious reason). His interviews on Newsnight (well, the ones I've watched at any rate) haven't really impressed me. He seems much more suited to talk radio.

And he doesn't listen closely enough to his interviewees either. Last night's Newsnight also had an interesting feature on how hackers stole control of a Chrysler car and interviewed Andy Greenberg, the Wired journalist who won the scoop (a potentially very scary one), Andy Greenberg. Mr Greenberg made it clear early on that it's not just Chrysler who are at risk. Most car manufacturers could be hit in the same way. A minute or so later, however, James O'Brien asked him...er...if it isn't just Chrysler who are at risk, but whether lots of other car manufacturers might be at risk too. Mr Greenberg said yes (politely not registering any displeasure at having been not listened to by his BBC interviewer).

And fourthly and finally, last night's Newsnight opened with a feature about the views of the Bank of England's chief economist. I've watched and re-watched this interview and the framing report by Newsnight's (former TUC chief economist) Duncan Weldon and the subsequent discussion between Duncan and James O'B and still think that Newsnight was seriously going over the top about it. (I thought of the phrase "creaming themselves", but then thought better of it). James O'B in particular was hyping the BofE man's intervention - which, in fairness, was an interesting and radical one (and well worth reporting) - as a staggering assault on the UK's capitalist system. [I'm not exaggerating there, by the way].

Wonder what Jeremy Paxman would make of all this? What does he think Newsnight's "teenagers" are up to here?

[P.S. If you watched the same edition of Newsnight as I did and felt differently, please feel free to disagree. I could be wrong after all. Though I'm not. Probably].
Posted by Craig at 16:02