'Panorama' judged to have broken the law 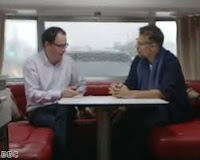 Do you recall The Curious Incident of the Panorama Episode that Disappeared in the Night - that election-related edition featuring Richard Bacon and Nate Silver which mysteriously disappeared from the BBC iPlayer?

Well, it turns out that it broke the law over road safety.

According to an expert in The Caravan Times (which I've just stumbled across), the programme's breaches of the law were many and various:

"A vehicle lit for filming is potentially a great distraction to other drivers. The film shows serious offences - passengers not wearing seat belts, no towing mirrors to safely see around the towed vehicle (£50 fine per mirror), hogging the centre lane of a motorway. that alone is potentially 3 penalty points and £100 fine."

So that might be the real reason why it was removed from the iPlayer.

Here's the BBC ECU's ruling against it.

Look out for the return of a familiar BBC gambit in that ruling too: The 'It Wasn't Us. It Was Someone Else' Manoeuvre. In this case "the independent production company concerned" cops the blame:

Who Will Win the Election? Panorama, BBC1, 27 April 2015: Finding by the Editorial Complaints Unit

Complaint: The programme included shots of the presenter and a contributor in a moving caravan being towed on a public road. 11 viewers with an interest in caravanning complained this was unsafe and illegal.

Outcome: Although the independent production company concerned had sought expert advice on the matter, their belief that they had acted in compliance with traffic regulations was mistaken: carrying passengers in a moving trailer of the type used in the programme contravenes The Road Vehicles (Construction and Use) Regulations, 1986. The Editorial Guidelines say that programme makers should observe the law unless there is clear editorial justification for not doing so, and there was no such justification in this instance. Upheld

Further action: The BBC’s Head of Safety has written to the production company, reminding them of the need to ensure that filming does not involve breaches of road traffic laws and health and safety regulations.