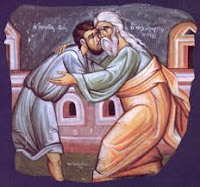 We had an overnight comment a couple of days ago from someone disagreeing with our take on Lyse Doucet's Children of the Gaza War documentary.

He argued - from what I saw of his comment - that the programme had a pro-Israel bias, saying (among other things) that the BBC shows Israeli women as 'people like us' whilst showing Gazan women as 'the other', dressed up to the eyeballs in hijabs.

Waking up early yesterday morning (and I do mean 'early'), I blearily switched on my tablet (rather than the laptop I prefer to blog on) and checked out the 'Dashboard' here at ITBB to see if any comments needed fishing out of 'Spam' (as sometimes happens with comments here - for some bizarre reason - and which bothers me immensely).

I spotted that comment and decided to read it in full (as I do all comments).

Unfortunately, instead of using my 'prodder' (or whatever's the correct name for that thing people use to type on tablets and mobile phones) I used my fingers, and while meaning to click on the post's title to take me into the post so I could read the comment in full clumsily clicked the 'Remove Content' button instead , which...er...removes comments permanently.

I frantically tried to get it back, but failed.

Since then I've felt embarrassed about this, especially as that commenter probably now thinks we're the sort of site that simply deletes comments which disagree with us (which we aren't) - and especially as it was, from what I saw of it, a polite comment.

So please accept my apologies for sending your comment into the furthest reaches of cyberspace. And, if you can be bothered, please try again.

Of course, we are very likely to vigorously disagree with you (just as politely), but that's what blogging is supposed to be about.
Posted by Craig at 19:14