Last week's Feedback turned into what I felt to be a loaded editorial/crusade against the (proposed) new dispensation for the BBC. This week's edition was hardly any better.

My evidence? Well, where to begin!

Perhaps at the beginning, with Roger Bolton's introduction:

Hello. "A much diminished, less popular BBC". That is what the corporation says is suggested by the government green paper on the BBC's future. The opposition says Radio 1 and Radio 2 in particular are in the firing line. What do you think?

(Maybe he should have begun, "Woe, woe and thrice woe!" instead of "Hello" there.)

You will have noticed two negatives, no positives, and then a question there. That's the kind of thing that's often styled 'a leading question', isn't it?

Shouldn't he have begun instead with something along the lines of: "The government says this, the BBC says that and the opposition says a third thing. What do you think?"?

And on it went.

Yes, BBC decorum was maintained, but that same editorialising tone (albeit less blatant this week) and the same editorial message continued throughout.

Stand back and please listen for yourselves though.

Just listen, for example, to Roger's interviewing of Jake Kanter from Broadcast magazine.

Jake, far from unsympathetic to the BBC in his comments, received questions from Roger from his (Jakes') own perspective (indeed more strongly-expressed versions of his own perspective). Shouldn't Roger's questions have come from the other (BBC-critical) side, in true devil's advocate fashion?

It made things worse here that Jake was introduced as if he were a disinterested observer - a media expert from a magazine about broadcasting...

Jake Kanter is news editor of Broadcast magazine, and he's been observing the twists and turns of this story...

...which is how I took him until, listening to the interview and getting a strong sense of where he was coming from, I thought I'd better just Google around and check...

And, lo and behold, it turns out that Broadcast magazine hasn't just been standing, disinterestedly, on the sidelines observing the twists and turns of this story (as Roger implied); it's actually been very actively campaigning on the BBC's behalf for a couple of months. 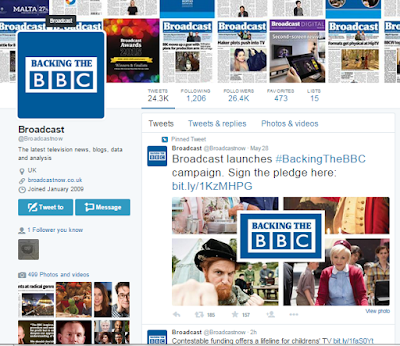 Yes, Broadcast magazine has been at the forefront of the 'Backing the BBC' campaign since just after the May general election.

And Jake himself has been vigorously tweeting to that effect ever since (as Feedback must have been aware)...

...and yet at no point in today's Feedback was that pointed out.

You would have thought, wouldn't you, that Roger Bolton might, during the course of his interview with Jake Kanter, had said something along the lines of, "Now, Jake, you at Broadcast magazine have been sticking up for the BBC with your 'Backing the BBC' campaign,  but do you think...?" but, no, no such question came out of Roger's lips.

That, frankly, is exactly the kind of thing that gets the BBC a bad name.

Their own editorial guidelines advise that, for impartiality's sake, an unfamiliar guest's 'starting point' should be made clear to listeners in advance (to help them understand where each speaker is coming from) - if it's relevant, as it was here. Presenting them as 'impartial' observers (if they aren't) is supposed to be an absolute no-no,,.

...and yet here was Feedback presenting Jake Kanter of Broadcast magazine as just such a person.

Do you find that as troubling as I do? (And if not, I'd love to here why).

Now, yes, the programme was peppered with listeners' opinions...the voice of the (Radio 4) people.

The majority took what I take to be Roger Bolton's line, complaining about the government's proposals and defending their precious BBC.

That said, two contrary views were heard during the closing three minutes of the programme, allowing Roger Bolton to end by saying, "We've tried to air a range of views about the future of the BBC".

One said the BBC should be reduced to just one TV channel, one radio station and one news outlet (an extreme position guaranteed to appal most BBC viewers and listeners - and me [I'd like Radio 3 and Radio 4, at least, to survive]); the other ended up comparing the BBC to Greece and the Soviet Union (the kind of thing which often goes down well with 'people like us' but possibly not the rest of the population - and certainly a good proportion of the Radio 4 audience, I suspect).

[Roger thanked him, rather too smugly to my ears].

We'll never know who contacted Feedback, or the proportions from each side, or whether Feedback chose their sample of opinion fairly or not, or whether any other 'people like us' made their case more strongly (and persuasively) and were simply ignored, or whether Feedback deliberately chose the most Radio 4 listener-unfriendly 'vox pops' to represent the 'antis'...

Feedback, the 'guardians' of Radio 4, clearly need watching. The past couple of episodes have been seriously unsatisfactory. I've complained directly to the programme.

(If you wish to do the same the email address is: feedback@bbc.co.uk).
Posted by Craig at 21:48