Abe the Andalusian and the BBC 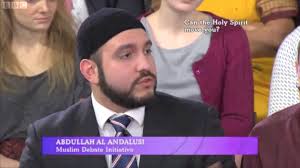 Those nice bearded chaps at CAGE aren't at all happy with Andrew Gilligan of the Telegraph today for his article, By day, at heart of counter-terror policing. And by night, preacher of extremism.

Here's what got up their noses:

The Government watchdog which inspects police forces’ readiness for terrorism admitted that it employed one of Britain’s most notorious Islamic extremists.

By night, he taught that the terror group Islamic State of Iraq and the Levant (Isil) was “no different to Western armies,” said that “kaffirs,” non-Muslims, would be “punished in hell” and claimed that the British government wanted to destroy Islam.

By day, using a different name, he went to work for the same British government at the London offices of Her Majesty’s Inspectorate of Constabulary (HMIC), the official regulator of all 44 forces in England, Wales and Northern Ireland.

Looking at Abdullah's Twitter feed, it appears as if the BBC had really taken him to their hearts.

Here's just a few examples from the past month or so:

I will be appearing on BBC radio Ulster today at 12:30pm to discuss the recent incident of a Police Officer being... http://t.co/eQtox1gisA
— Abdullah al Andalusi (@AbdullaAndalusi) June 22, 2015

...and, of course, he's recently been on 'The Big Questions' (it almost goes without saying):

The BBC really do pick 'em, don't they?

And, lest you were missing him already, here is a sample of what Abdullah al Andalusi has to offer the BBC in the way of incisive, reasoned Islamic thought: