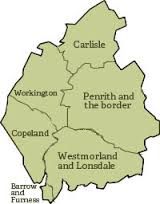 The new Lib Dem leader Tim Farron holds the constituency directly to the north of my own (the fine Conservative-held seat of Morecambe and Lunesdale): namely, Westmorland and Lonsdale.

Westmorland and Lonsdale is a seat you'd expect to be very safely Conservative - and it used to be a very safe Tory seat until Tim Farron won it by an extremely tight margin in 2005.

By 2010, however, Tim had made it in a very safe Liberal Democrat seat - so safe that, despite a significant fall in votes, he still managed to win in 2015 by a comfortable margin.

I remember very clearly driving through his constituency during the 2010 election and being astonished - yes, astonished - by the number of signs and posters backing Tim Farron. They were so ubiquitous that I expected most of the the cows and sheep of South Lakeland to be sporting 'Vote Tim Farron' badges as well. Tory posters were almost entirely absent (except a couple in the middle of a field in the middle of nowhere as we approached the safety of our beloved Morecambe and Lunesdale).

What had he done to bring this about in 2010? What did he do to still win by a large margin in 2015 (when most of his colleagues across the country were culled)?

My answer up until this week has always been: I've not got a clue. Yes, he's positioned himself cannily politically on the Left of the Lib Dems - but why would the latter help him in South Lakeland? So, putting my thinking cap on, it must be to do with his record as a constituency MP and his personality (which, to anyone but a hardened partisan, seems quite charming and straightforward).

The curious thing though is, until this past week, I had absolutely no idea that he was an evangelical Christian. Nor that he's previously held religiously-inspired 'socially conservative' positions on issues like abortion and gay marriage (though he's apparently 'softened' those recently).

I do now though. And how!

The media seems to have suddenly discovered that fact and gone collectively crazy about it. From Channel 4 News to the Spectator and the Guardian (and the rest), there's been a veritable furore about Mr Farron's Christian faith this week, and his resultant social beliefs...so out of keeping with the prevailing 'liberal' (media) mood it seems...

...and the BBC has, inevitably, been near the forefront of the panic about this.

There really does seem to be something about deeply-held Christian beliefs - especially Evangelical ones - which completely dumbfounds 'liberal' BBC types. Such views must seem so alien and distasteful to them...and especially dumbfounding given that, otherwise, he's such a nice, left-wing Lib Dem.

Now, in fairness to Andrew Marr and William Crawley today, both BBC presenters wondered aloud on their programmes whether this might be a case of liberal, metropolitan sneering.

That's progress, I think. (And that's coming from a fully paid-up social liberal - namely me).

I don't remember Baroness Warsi, however, getting anything like this kind of treatment when she made chairwoman of the Conservative Party a few years ago. Her views on abortion and gay marriage didn't come under such intense scrutiny, for some reason.
Posted by Craig at 16:01