Everything crowds under the low horizon 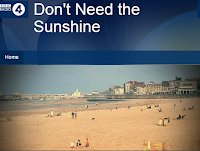 Just to add something more about that Stewart Lee piece...

Last Sunday, after I read in the Sunday Times of the culture secretary’s plans, I was stuck in traffic on the north circular with the kids. A new young writer called John Osborne, who I hadn’t heard of before, came on Radio 4 and told a half-hour story about childhood holidays that left all of us, aged four, eight and 47, spellbound. The kids noticed I was crying and asked why.

I explained it was not just the quality of the work, but also that the government were dismantling the only broadcaster that would ever commission it. My eight-year-old said that if David Cameron did that he would send him a collage of hundreds of photographs of dog muck. You cross creatives at your peril.

Now, maybe his eight-year-old out to have done him a kindness and slapped him and told him to stop being so ridiculously hysterical about the government's plans for the BBC...

...but Stewart Lee is completely right about the quality of that John Osborne programme. Don't Need the Sunshine, humorously yet movingly recounting the author's past experiences of four seaside resorts, was superb. I'd urge you to listen to it too, if you have a spare half hour.

And, yes, I also found myself welling up at one stage.

(I may even be tempted to buy the book, which preceded the programme. It looks as if it includes a chapter on Morecambe.)

All of which calls for a Philip Larkin poem:

To step over the low wall that divides
Road from concrete walk above the shore
Brings sharply back something known long before--
The miniature gaiety of seasides.
Everything crowds under the low horizon:
Steep beach, blue water, towels, red bathing caps,
The small hushed waves' repeated fresh collapse
Up the warm yellow sand, and further off
A white steamer stuck in the afternoon -

Still going on, all of it, still going on!
To lie, eat, sleep in hearing of the surf
(Ears to transistors, that sound tame enough
Under the sky), or gently up and down
Lead the uncertain children, frilled in white
And grasping at enormous air, or wheel
The rigid old along for them to feel
A final summer, plainly still occurs
As half an annual pleasure, half a rite,

As when, happy at being on my own,
I searched the sand for Famous Cricketers,
Or, farther back, my parents, listeners
To the same seaside quack, first became known.
Strange to it now, I watch the cloudless scene:
The same clear water over smoothed pebbles,
The distant bathers' weak protesting trebles
Down at its edge, and then the cheap cigars,
The chocolate-papers, tea-leaves, and, between

The rocks, the rusting soup-tins, till the first
Few families start the trek back to the cars.
The white steamer has gone. Like breathed-on glass
The sunlight has turned milky. If the worst
Of flawless weather is our falling short,
It may be that through habit these do best,
Coming to the water clumsily undressed
Yearly; teaching their children by a sort
Of clowning; helping the old, too, as they ought.
Posted by Craig at 15:38