It also shows, however, some differences in focus, with ITV and Sky taking somewhat different tacks to the BBC.


ITV's coverage is straightforward. Its main story is:

And its accompanying stories are:

Sky News's coverage leads with a new video showing how the "gunman" Rezgui was "unchallenged by security forces, tourists or hotel staff", and has the following accompanying stories: 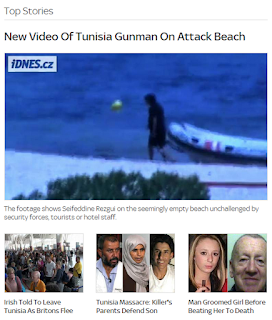 The BBC, alone among the three broadcasters, doesn't feature the news that the Irish government has joined the British government in telling its citizens to leave Tunisia.

Its main story is:

Tunisia Britons fly home after alert
The first British tourists fly home from Tunisia. as the UK defends its decision to advise all British nationals to leave the country

The use of "as the UK defends its decision", uniquely among the three broadcasters, raises a question mark over the British government's decision.

The BBC's accompanying articles are...

* Militants killed in Tunisia mountains
* What next for Tunisia holidaymakers?
* "We would have stayed in Tunisia"
* Tunisia Britons 'confused' and 'angry'

...two for which also put dissatisfaction with the UK government's decision at the forefront of BBC online readers' minds. 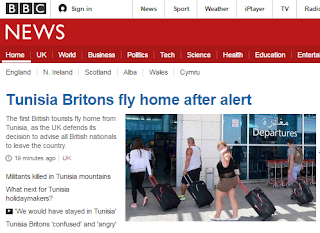 There usually seems to be an angle when it comes to BBC reporting. Do you agree that there's one here?
Posted by Craig at 19:17