Is Ciaran Getting a Raw Deal? 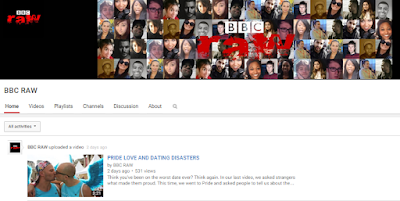 As this story comes courtesy of the Daily Mail, I think it's only right to use the phrase "You couldn't make it up" at some point in this post, so you have been warned.

Various MPs, from both the Conservative and Labour parties, have called for an investigation into the channel to see if BBC editorial guidelines on impartiality and bad language have been breached.

The surprising bit here (for none of the above really surprises me, given that Radio 4 comedy seems to be like that all the time!) is that Ciaran's mum, Cheryl Varley, is the BBC executive responsible for BBC Raw - which, I'm sure you'll agree, sounds like a delightful coincidence. And...

...her job title is the BBC's 'social mobility executive'.

You couldn't make it up.

One film, Record Store Day, was supposed to be about the annual celebration of independent music stores up and down the country.

However, it almost exclusively focused on a music shop co-owned by another of Miss Varley’s sons, James.

A source described it as ‘product placement’, but a BBC spokesman said the suggestion was ‘utter nonsense’.

The spokesman said: 'Any suggestion that this is product placement is utter nonsense. The film is consistent with our editorial guidelines.'

For those wanting to watch BBC Raw material (and who wouldn't?), here's their YouTube channel and this is how the BBC describes the purpose of BBC Raw there:

Raw is a BBC Pilot Project, an incubator for socially and racially diverse young people who want to develop into filmmakers for the BBC (filmmakers for BBC3 Digital).

The films on this site are made by members of the BBC’s Creative Hubs. Hub membership is made up of young people, aged 18 to 28 who come from working class backgrounds. They film, direct and edit all their own content using their own smartphones, equipment and online edit software. The content of their films is based on their own ideas, stories and issues from their life experience – these are subjects that matter to them.

The BBC provides a platform to show Hub members films plus support and encouragement to the young people to help them grow as film makers.