Put your feelings aside

We get caught up in semantics, such as 'what should we call Islamic State if we don’t want to look as if we’re legitimising the aspirations of a bunch of savages or allowing them to be perceived as representatives of Islam for fear of alienating The Muslims?'
One argument posits that there can be no confusion about what is meant by ‘Islamic State’, since that is what the movement calls itself. The suggested alternatives don’t resolve those issues because they retain the offending words ‘Islamic’ and ‘State’ save the one that is an acronym for 'Islamic State' in Arabic.
I couldn’t give a stuff. Call it whatevah. Call it ‘everyone hates us and we don’t care’ if you like.

Semantics which are of more interest concern the ‘Jew or Israeli’ contretemps, closely related to the ‘anti-Zionism’ or ‘antisemitism’  dispute.
We all know that covert or ‘in denial’ antisemites try to launder the fundamentally antisemitic memes they spout by claiming their criticisms are dispassionately formulated, not at all racist and would equally apply to any other entity, government or culture.
Concealing racism beneath a cloak of reason and logic can fool anyone, including the perpetrator who always sees him/herself as a good person.
With criticism of Israel in particular, intent is all, and people will lie about that, because they can.
Criticism of anything, no matter what, should pass a basic test. Would it hold up if directed at an equivalent target? With Israel, we need to take into account where the critic is ‘coming from’ in order to distinguish whether a criticism is valid and perhaps well-intentioned or just antisemitic. 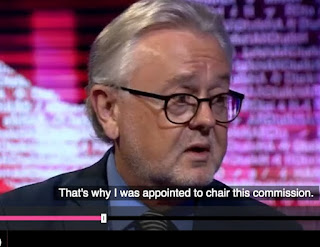 An episode of HardTalk might illustrate this. It’s with Stephen Sackur and William Schabas, the former head of UNRCC of Inquiry into events in Gaza in 2014. Schabas stepped down after pressure from many directions. Objections were on the grounds of his well-known bias against Israel.
Near the beginning of the interview he claims that he is not biased, but even if he was, he is perfectly capable of putting his feelings aside and acting professionally, as journalists do all the time.

“Journalists have opinions, Journalists have made public statements, some of them have been involved in politics, and they put them aside to do their job in an professional impartial and objective manner.”

His appearance, a kind of hang-dog chubbiness, did not lend credibility to what I believe is a somewhat far fetched assertion.
For once I thought Stephen Sackur did a good job. He seemed well briefed.
With this business of the BBC’s decision to translate ‘Yahud’ to ‘Israeli’ rather than its literal meaning ‘Jew’, there is a clear attempt to airbrush away the racist element of Palestinian (Islamic) hatred and Arab rejectionist politics.

The child in Lyse Doucet’s film who said he wished all Israelis were dead does really mean Jews; he probably doesn’t wish the same for Israeli Arabs. The Islamic clerics and religious leaders are quite clear who they see as their enemy. Jews. Hamas may have learned to use the term Israeli when addressing their western friends in the media. They know which way their bread is buttered.


But for the BBC to collude in that masquerade is truly objectionable, and the decision to adopt “Israeli” for “Yahud” as a suitable translation cannot be a morally justifiable interpretation of their editorial powers.
Posted by sue at 19:18