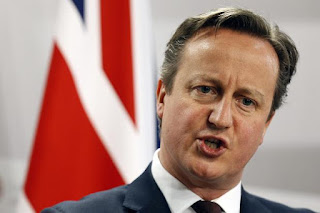 “British Muslims who hold “intolerant ideas” and create a climate for extremism will become the target of a new clampdown to be announced by David Cameron today.In a landmark speech the prime minister will say that a failure of integration has meant that there are people born and raised in this country who do not identify with Britain. Outlining a five-year strategy to combat extremism, he will attack those who hold ideas “hostile to basic liberal values” and who promote “discrimination, sectarianism and segregation”

So says the viewable content you can access without £ forking out. I have a hard copy.  It goes on to say:

"Mr Cameron will single out Muslim conspiracy theorists who believe that “Jews exercise malevolent power” that 9/11 was inspired by the Israeli intelligence agency Mossad, and that Britain allowed 7/7 because they wanted an anti-Muslim backlash. “When you look in detail at the backgrounds of those convicted of terrorist offences, it is clear that many of them were first influenced by what some would call non-violent extremists” he will say. “It may begin with hearing about the so-called Jewish conspiracy and then develop into hostility to the West and fundamental liberal values, before finally becoming a cultish attachment to death.”

Emphasis added. Now, I don’t think that is particularly insightful, but it’s better than nothing. At least it is a report about Cameron’s speech and his clampdown, not an argument about whether it’s morally sound.

The BBC has “Cameron to unveil plan to tackle Islamist extremism.” 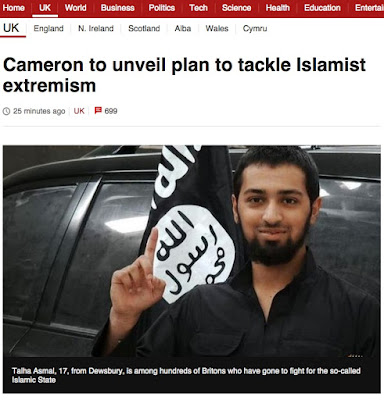 Nice use of ‘unveil’ there.  Someone will probably get that changed. The BBC adopts the famous ‘impartial’ approach, studiously including opposing views, for balance. (The fact that this should be a news item about Cameron’s speech and as such might be better off concentrating on that is an arguable point)
Notably absent is any, I repeat any, reference to Jews, the Jewish question, Israel, Mossad, malevolence, Jewish conspiracies.”

I included that 'grab' (above) because, you guessed it, the page has been updated. It now has a new look with a video, a refreshed headline :

"Cameron unveiling plan to tackle Islamist extremism" and does now include this passage:

"It may begin with hearing about the so-called Jewish conspiracy, and then develop into hostility to the West and fundamental liberal values before finally becoming a cultish attachment to death.

Maybe a fuller account will emerge as the day progresses. We'll wait and see.