Gosh. It almost looks as if the BBC impartiality monitors desperately needed something to redress the balance after promoting the ‘rise in antisemitic attacks’ yesterday

Of course I don’t really mean that.

Or do I?  One could try batting some pros and cons back and forth. Ping-pong in search of an answer.  Are there grounds for cynicism? 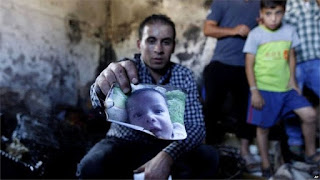 This is about the arson attack, a horrible act of violence that caused the death of 18 month old Palestinian Ali Saad Dawabsha. It looks as though it’s another so-called ‘price-tag‘ incident carried out by teenage, Jewish, extremist, illegal settlers. There’s no doubt about the vileness of that act.

Of course, when the BBC chose to feature that incident in their morning headlines, they weren’t being gratuitous or anything like that. Plenty of other news outlets reported it too. Not just the BBC.
Most took a similar stance, quoting both the Palestinian leadership’s characteristically melodramatic condemnation of the attack  (and the occupation, war crimes and settlements)  and the Israeli PM’s robust, unequivocal condemnation of it.

On the other hand, there was an almost imperceptible relish in the way the BBC announced the fact that the victim was an 18 month old baby. In fact the death of the baby seemed to have been annunciated with a flourish.

Or was it? Did I imagine that? Did I also really detect a certain stridency of tone when Mishal Husain asked  the initial interviewee, Gregg Carlstrom of the Times (no particular friend of Israel) if the perpetrators of these ‘price-tag’ attacks were ever held to account or if they were allowed to do whatever they liked ‘with impunity’.

On the other hand, the Today programme did allow the bane of every Israel-basher’s existence, Mark Regev  to have his say. Not that Mishal was particularly civil to Regev. He’s every complainant’s one-man catalyst whose merest appearance on the BBC is enough to incite a barrage of apoplectic protests. I have a sneaking suspicion Husain wasn’t convinced by his condemnation of the attacks.
She insisted on asking what percentage of price-tag attacks were prosecuted or brought to justice, (Regev didn’t have those figures) which, now I come to think of it, he might have countered by asking: What percentage of terror attacks against Israelis was reported by the BBC? (less than 1% in the first quarter of 2015)

It’s a sensitive subject. If you mention anything that starts looking as if you’re going anywhere near defending the killing of a baby you’re in big trouble. Even if you unintentionally do so by association, intimation or implication. Anything other than unadulterated, unequivocal condemnation will not do. You will appear to be nothing but a cruel and heartless cynic.

And yet, there are things that one could say. Things that haven’t been made known - the BBC’s deficiency, I'd have thought.

They’re mostly things that come close to ‘whataboutery’. Well, they are whataboutery.
What about the terror attacks perpetrated by Palestinians on Israelis that don’t make the headlines, and don’t even make the news.

Mahmoud Abbas said he holds Israel as a whole responsible for this. An online comment surmised: ‘by the same token, the PA is accountable for all the rocket attacks and acts of terror against Israel’.

The BBC tells an unfair tale. It is quite content to present such incidents as having the tacit approval of the Israeli government and the enthusiastic backing of Israelis as a whole. It implies that Israel turns a blind eye to the violence and lets the perpetrators off with a wink and a nod.
The BBC’s presentation of Hamas’s ‘strategy of warfare’ has done nothing to disabuse the public of their unjust perception of Israelis whom they see as baby killers.  They are ready to accept that the average Israeli would likely encourage the murder of Palestinian babies.

However, as far as I can tell, militant settlers are regarded by most Israelis as a fifth column. They’ve had some of their homes demolished by the Israeli government because they were constructed without planning permission.

“Those behind the attack are believed to belong to the anti-Arab Price Tag organization, which operates in West Bank Israeli settlements. The group had previously vowed to attack Palestinian targets every time the army takes action against Israeli settlers and settlements.

It was the aforementioned Gregg Carlstrom who reported in today’s Times (£) a piece headed: “Demolition of settler homes opens rift in Israel government”  It says Benjamin Netanyahu has approved a considerable number of new homes to compensate for the demolition of apartments built without permits.

Look at the statements from PM Netanyahu, Peter Lerner, (he calls it an act of barbaric terrorism) and other Israelis. Outright condemnation from all of them, but greeted by us with skepticism.
Compare it with the praise that is heaped upon the Palestinian perpetrators of acts of violence and terror by Mahmoud Abbas and the Palestinian leadership. The Palestinian Authority and Hamas are agreed on that, if nothing else. The Palestinian killer who attacks a Jew is a hero. What is our response to that? What is the BBC’s response? None at all.

The BBC is doing exactly what the settlers want. I think we do ourselves and everyone else a disservice by going along with the settlers and doing their bidding.  We’re doing what they want us to. The Israeli government calls them terrorists and describes the  act as ‘reprehensible’, yet we ignore that and blame Israel all the same. Who benefits from that? The bleeding teenage militant Jewish extremists, that’s who. 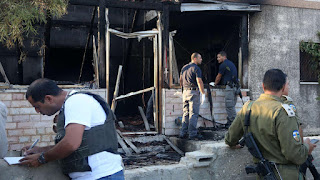 None of this mitigates the crime; but the jury’s  still out on the BBC’s reporting of it.