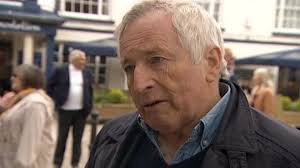 You may or not have spotted this (as I believe only the Guardian and the Daily Mail have covered the story), but the BBC Trust has issued a rare damning verdict on a high-profile BBC presenter - namely Jonathan Dimbleby:

The Committee considered the serious editorial breach which occurred during a trail for the programme Any Questions? on Radio 4’s Today programme. In the trail, the Any Questions? presenter Jonathan Dimbleby included information on the charity he had helped to establish in memory of his father and explained how listeners could support it.

The Committee concluded that this was a serious breach of the Editorial Guidelines on Impartiality, Conflicts of Interest, and External Relationships and Funding.

The offending exchange on Today ran as follows:

Jonathan Dimbleby: And Justin, I just want to add a football, a personal football, a footnote not football – well it’ll turn out to be a football...

Justin Webb: Not some kind of confession is it?

Jonathan Dimbleby: Well it’s going to hit me in the face I think probably– I’m not going to be with you next Friday morning. I haven’t resigned, I haven’t been sacked - yet. But when Any Questions? goes on air, I shall be leading a fifty kilometre night-time walk through London to raise funds for the cancer charity we set up after the death of my father fifty years ago. If you want to support our work, our walk, you can find out more online – Dimbleby Cancer Care. Er, now I will be sacked won’t I?

Jonathan Dimbleby: …No I think you’d better not, otherwise you could be… Eight o’clock this evening, we’re on air anyway.

Justin Webb: …exactly, but I will support you privately at least.

This was the response from the BBC Executive:

The Executive confirmed that they considered this was a serious breach of the Editorial Guidelines. They noted that it was an off-the-cuff addition to an otherwise scripted trail.

They stated that it was not uncommon for presenters who were well known to audiences to mention activities they were involved in from their personal lives. However, they noted that it was less usual for this to happen during a brief trail slot and that, in this case, the information about how listeners could support a presenter’s charitable endeavour went significantly beyond what could be editorially justifiable. They stated that the Director of Editorial Policy had written to Jonathan Dimbleby very shortly after the broadcast and the Director, Radio Production, had also discussed it personally with the presenter. The head of the department responsible for the programme’s production had also reminded the presenter about the requirements of the Editorial Guidelines conflicts of interest.

(No mention of whether anything was said to Justin Webb about his "but I will support you privately at least.")

And this was the Trust's final decision:

Trustees noted that the presenter’s trail had been scripted and that the script had been seen prior to transmission. However, the presenter had ad-libbed to refer to a charity event of considerable personal significance to him. They appreciated that he had a strong emotional link to the charity. However, they noted that a considerable number of other well-known BBC correspondents and presenters also had enduring links with particular causes and charities to which they had an equally significant emotional commitment.

Trustees noted that the BBC had set up strict protocols around the broadcast of charitable appeals. They also noted that the Editorial Guidelines guarded against any individual’s interest having an undue impact on broadcast output and that this also served to protect charities generally from an individual favouring one particular cause. They noted that the timing of the trail gave the presenter access to a very large audience – and that other charities did not have the opportunity to reach that audience.

Trustees noted the action that had been taken by the Executive and considered this was an isolated case and would remind presenters and correspondents generally of the requirements of the Editorial Guidelines. They considered that the broadcast was a serious breach of the Editorial Guidelines for Impartiality, Conflicts of Interest, and External Relationships and Funding but it had been mitigated by the swift Executive action.

I can't say that Jonathan's transgression is one I feel particularly outraged about (rather the reverse in fact), but there you have it anyway. Just thought you'd like to know.
Posted by Craig at 19:15