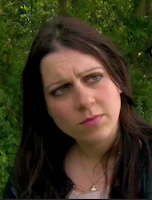 Last night's Front Row on Radio 4 previewed The Last Kingdom, the BBC's new epic drama/attempt to cash in on the success of Game of Thrones. It concerns the Vikings' invasion of Anglo-Saxon England. BBC historian Dr Janina Ramirez talked to Kirsty Lang about it.

According to Dr Ramirez, it looks as if it might 'express' a familiar BBC point:

And there's some very important questions being asked about identity - something we still need to ask ourselves today. It's a truism that we trace English heritage back to the Anglo-Saxons but that in fact...it was a mixed, culturally-diverse place, very cosmopolitan, and this series, I think expresses that very well.

I bet it does.

Guest, wise as water,
Translated one found Buson
For us. Petals fell.

"The torn paper um-
brella has just become a
ghoul with moonlit eyes".

Tip for Halloween:
Must tear paper umbrella,
scare trick or treaters.
Posted by Craig at 10:06