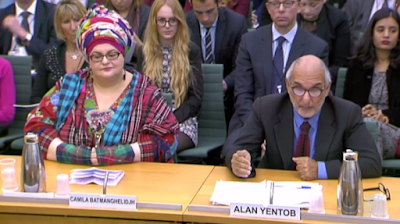 It proved quite a draw it seems (well, for those of us not at work and interesting in such things) and was rather riveting.

Papers like the Telegraph have been live-broadcasting it, and blogs galore have been abuzz with talk about it.  It's been one of the 'trending' things on Twitter too. It was definitely hot 'n' happenin', as they say on certain BBC channels (e.g Radio 3).

From what I saw and others' reporting of it, Mr Yentob got quite a bit more of a grilling than Miss Batmanghelidjh.

Watching BBC One's News at One to see how the BBC was covering a story that partly relates to itself....

[...i.e. a story involving a lot of controversy about the behaviour of one of its top executives for appearing to have a conflict of interest...]

....well, BBC One's News at One did cover the story, giving it just under two-and-a-half minutes in the middle of the bulletin, including a report from Michael Buchanan.

I felt that Camila came off considerably worse than the BBC's Alan Yentob from the BBC's reporting here. This segment was unquestionably mostly about her.

Using my trusty stopwatch and calculator on this segment of the News at One I found that Alan Yentob (of the BBC) received a mere 20% of the attention.

Of that half-a-minute of coverage, nearly all of it was devoted to repeating Mr Yentob's highly contentious claims about the crimes that have been committed as a result of the closure of Kids Company (twice).

The BBC's Michael Buchanan then said (in three seconds) that the MPs "disputed" Mr Yentob's figures before going straight on to use the word "implied" about what the MPs were saying in general.

In his testimony to parliament, Alan Yentob claimed that the BBC is even tougher on itself than anyone else when it comes to grilling top BBC executives. (I'm guessing he had John Humphrys in mind for helping force out George Entwistle after Savilegate).

This BBC News at One segment didn't seem to be in that noble (one-off?) tradition.
Posted by Craig at 17:40