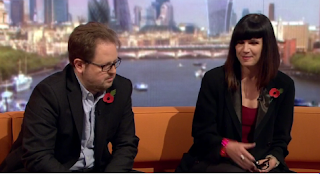 This morning's Marr Show was a bit rum. ("A bit rum" is the sort of thing Andrew Marr himself might say, so I thought I'd use it here in his honour).

One of the rum things was Andrew Marr's treatment of one of his paper viewers - the former Time journalist Catherine Mayer.

She's the founder of the Women's Equality Party (along with Sandi Toksvig). I first came across her because she's a long-time Dateline London guest. She's also been a fairly regular paper reviewer on the Marr show (7 times in the past 3 years).

The last time she was on the show, just after the election, she got to plug her new party (the Women's Equality Party was only formed in March) and I remember thinking that was a bit rum at the time...

...and yet here she was again, sitting on the sofa and being given absolutely free reign by Andrew to plug her new party again.

Bear in mind that this was the Marr paper review and that St. Matthew d'Ancona had just been reviewing a tax credit cuts story in the papers when, inviting Catherine Mayer into the paper review, our Andy said:


Now Catherine, I introduced you at the beginning of the show as one of the leaders of Britain's newest party. Explain.

And explain...or shamelessly plug...she did - even down to spelling out the party's web address! ("Very good, very good", said Andrew jovially).

Ah, the perks of being a favoured MSM insider! And of pushing a nice PC cause that no BBC insider could resist!

What other start-up political party would get such a boost from the BBC? 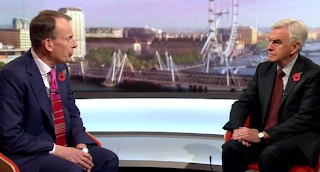 The second rum thing was Andrew Marr's extraordinary interview with Labour (far-left) shadow chancellor, John McDonnell. I could hardly believe what I was hearing. It was unbelievably gentle.

Yes, towards the end he asked a question about Seumas Milne (yes, a question) and teased him about how nice he was coming across and whether he was hiding his real views, but most of the interview was taken up with a series of very soft - one might say helpful questions. There was barely an interruption in sight. He even began questioning the far-left Mr McDonnell from the far-left at one point:


I mean you were elected as a radical shadow chancellor or chosen as a radical shadow chancellor. We are now in a situation, there’s a big new book out on class just this week which shows that inherited wealth in this country is one of the biggest drivers of inequality, it’s massively important. So I wonder whether you are thinking about a really big change to inherited wealth – some kind of wealth tax, some kind of revised inheritance tax because if you don’t do that then these divisions are going to carry on?

But you’re not really about reviews. You need a wealth tax, don’t you?

When it comes to the whole … the whole taxation system, you said in your speech to the party conference you want to get a lot of money from the big companies – the Starbucks’ and so forth, the Amazons – not paying their full taxes. But you know politicians have said this for years and years and years. They have very, very clever accountants. Capital is mobile and international. It’s much … This is slippery money to get your hands on, very difficult.

The Conservatives' Nicky Morgan fared very differently. She got a proper grilling and the interruptions flew at her like English arrows at the French army at Agincourt. They almost affrighted the air (though not Nicky Morgan).

What was all that about? 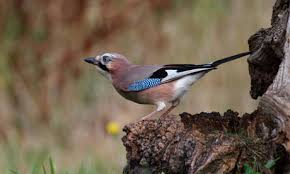 Oh and, of course, 'the arty bit'- an interview with poet Simon Armitage about his dramatisation of the Odyssey - was as political as ever. Odysseus's plight, migrating across the Mediterranean, was related to the present migrant crisis.

As Andrew Marr put it, his Zeus seems like a kind of "Eurosceptic prime minister" (part Cameron, part Blair, he suggested. [Are either Cameron or Blair really Eurosceptic?]). Simon Armitage agreed, saying he's "looking more and more like a Conservative prime minister".

The 'arty bit' is almost guaranteed to be a lefty spot these days. (Plus ça change).

Still, as I had the pleasure of watching a jay at fairly close range last week, here's an 'arty bit' from Is the BBC biased? - Simon Armitage's The Jay:

I had a blister-stigmata the size of an eye
in the palm of my hand
from twisting the point of a screw
into the meat of the house. Those days. Those times.

The bird was crossing the gravel path
in the style of a rowing boat crossing dry land.
Struck with terror when I held it tight
in the gardening-gloves of humankind, we saw for ourselves

the mouse-fur face and black moustache,
the squab of breastmeat under its throat,
the buff-brown coat and blue lapels,
the painted inside of its mouth,

the raw, umbilical flute of its tongue
sucking hard at the sky for the taste of air.
Setting it free, it managed no more than a butterfly stroke
to the shade of the unnamed tree, where we let it be.

They say now that the basis of life
in the form of essential carbon deposits
could have fallen to earth as a meteorite, or comet,
and that lightning strikes from banks of static

delivered the spark that set life spinning. It's a beginning.
But the three-letter bird was death, death thrown in from above,
death as a crash-brained, bone-smashed, cross-feathered bullet,
so we could neither kill it nor love it.