From bad to worse 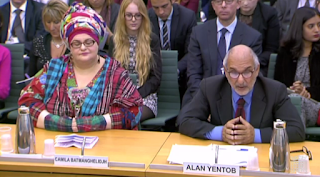 Things look to be getting even worse for Alan Yentob.

Following his unannounced presence in the Today studio (standing next to the producer) while Camila was being grilled, his call to Newsnight asking for its Kids Company report to be put off for a day, and his alleged bellowing at a BBC reporter (Lucy Manning) comes this...

BBC sources said that Nick Sutton, the editor of the BBC Radio 4 World at One programme, spoke to Fran Unsworth, the deputy head of news, to raise concerns about Mr Yentob’s behaviour over a Kids Company report that his show broadcast in August.

The spoken complaint was made after Mr Yentob personally called Edward Stourton, a presenter, on World at One to discuss the report on Kids Company shortly before it was broadcast.

The presenter felt that it was “inappropriate” and his concerns were passed on to Ms Unsworth, according to well-placed sources. BBC insiders acknowledged that concerns had been raised, but did not take the matter further because a formal complaint was not lodged.

Oh, and the mother of a murdered teenager has accused him of using her son’s case as a political pawn, telling him,  “Stop acting like you care when you don’t”.

"Sources" are saying he's be lucky to be still in place at the BBC by Christmas.
Posted by Craig at 09:21