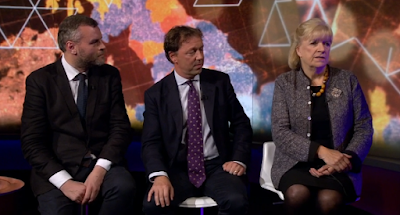 Looking back over those five Newsnight reviews, a few things struck me about the programme's Conservative Party Conference coverage - especially when compared to the previous week's Labour Party coverage.

Both conferences were covered over three editions, but the Conservative Party Conference received less attention (time-wise).

There were two set-piece interviews from the Conservative conference - one with David Cameron, the other a joint interview with Damien Green and Anne-Marie Trevelyan.

Why did the BBC give more attention to the main opposition party than to the governing party?

One possible answer is that Labour's extraordinary lurch towards the far-left and the ensuing chaos in the Labour establishment is a more exciting story (for those who like excitement in their news) and (b) that it would be of especial interest to those who lean leftwards politically (as so many at the BBC do).

The most striking difference, however, concerned the programme's punditry.

The following day's pundits were:

Now, despite famously being a Labour-supporting pollster, Peter Kellner probably ought to be regarded as a neutral pollster here; but, even exempting him, all five of the other pundits are Labour-backing types (of various hues).

In contrast, Newsnight's pundits for the Tory Party conference were, on Monday 5th October:

Charles Moore, Rachel Sylvester of the Times, and Andrew Rawnsley of the Observer

...of whom only Charles Moore is openly pro-Conservative...

and on Wednesday 7th October:

Polly Toynbee of the Guardian, Philip Collins of the Times, and Tim Montgomerie of the Times

...of whom only Tim is pro-Conservative - and the other two are pro-Labour.

There's definitely a difference here, isn't there? The Labour Party gets only pro-Labour pundits; the Tory Party gets two pro-Conservative pundits and three pro-Labour ones (plus an in-betweener).

What's going on here? That does seem peculiarly and blatantly biased, doesn't it?

One possible line of defence I can think of (playing devil's advocate) - especially going off having heard it before in the past - is that the Conservative conference is that of the governing party whilst Labour's is that of an opposition. Thus, the opposition party's conference can be treated as a purely Labour affair but the governing party's conference must be treated as national affair, subject to non-government-supporting points of view.

The counter-arguments to that run as follows:

Firstly, party conferences are, just for those weeks, purely party-related showcases for their respective political parties and, so, should be treated by the BBC in similar ways. Even the governing party, during that week, reverts to behaving as a political party...

...in support of which is my observation that some BBC programmes have, in the past, very consciously tried to balance things out between the parties, regardless of whoever is in power, so Newsnight's failure to do so here strikes me as something worth commenting on.

Secondly, the scale of Newsnight's imbalance against the Conservatives here is something else entirely. It's simply bizarre.

Still, as ever at ITBB, you are more than welcome to make up your own minds.
Posted by Craig at 18:10