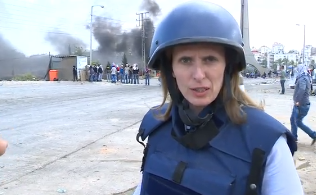 There's a complementary post to Sue's Tired of waiting over at BBC Watch:

Orla's style of reporting is described as "overly dramatic and exaggerated" - a succinct way of putting it.

Indeed Hadar's style couldn't be more different to Orla's. In this piece, for example, she patiently points out a number of inaccuracies (whether intended or otherwise) in Orla Guerin's latest reporting, specifically her 9th October TV report.

Here's one passage from Orla's piece:

Israeli security officials are playing that down but the police are on alert, especially in Jerusalem’s Old City. It’s home to the Al Aqsa Mosque; sacred to Muslims and Jews. Tensions over the shrine have fuelled the latest unrest and unleashed a new danger for Israelis: stabbing attacks.” [emphasis added]

...Hadar notes two errors on the BBC reporter's part here: Firstly, the Al Aqsa Mosque is not sacred to Jews. That's the Temple Mount (which isn't the same thing at all); and, secondly, stabbing attacks are far from new (there were sixteen in the first eight months of 2015 alone).

BBC Watch goes on to list a number of important omissions too, compounding such inaccuracies.

It's well worth a read - and, no doubt, complaints will be going in on the strength of it.

The one small crumb of consolation - so far - is that Fergal Keane hasn't flown in yet.
Posted by Craig at 14:43