I'm groping in the dark a bit with Wednesday's Newsnight. It all seemed a bit odd.

Instead of leading with David Cameron's big speech at the Tory Party conference it led with the previous night's Panorama...

...which might seem somewhat incestuous ("BBC shall speak peace unto BBC"), except that Newsnight's Nick Hopkins's report seemed to be more a case of sibling rivalry than incest (thank goodness!).

Nick Hopkins himself has pursued angles on the self-same story that Panorama was trying hard to discredit, so it's probably not much of a puzzle as to why he would want to cast such a quizzical eye over Panorama's latest edition.

Then came a strange interview with Mark Watts, the head of Exaro News - the media organisation that Panorama aired so many doubts out.

Evan Davis gave him a bit of a grilling but never seemed to go for the jugular. I thought that Mr Watts came rather well out of it.

The one thing I now about Exaro News, however, is that Newsnight has worked with them on several occasions in the past.

Was that why Exaro's chief was given such a prominent platform to defend his organisation at the start of this edition of Newsnight?

If it was, that puts the issue of 'incestuous behaviour' by Newsnight firmly back on the agenda.

And talking of 'incestuous behaviour' by Newsnight, this edition ended with a celebration of another BBC programme, The Great British Bake Off.

And further talking of 'incestuous behaviour' by Newsnight...


The programme's editor Ian Katz is, famously, a former deputy editor of The Guardian. The first report came from former Guardian ace investigative reporter Nick Hopkins. The second report came from former Guardian political correspondent Allegra Stratton. The pundit discussion featured Polly Toynbee of the Guardian (alongside Philip Collins of The Times and Tim Montgomerie). And the closing GBBO discussion had just one interviewee - Yotam Ottolenghi, a long-standing Guardian cookery columnist. Oh my God, the Guard i an!

The report from Allegra on David Cameron's big speech sounded quite enthusiastic. DC had shown that those who featured a lurch to the Right were wrong. DC has lurched to "the centre-left", she said - though he was still "hardline" on some things, like tackling FGM and terrorism. And as for those tax-credit changes, don't even go there sister!

The odd bit here was the pundit panel afterwards. Why were there two pro-Labour panellists (Philip Collins and Polly Toynbee) and only one pro-Conservative panellist (Tim Montgomerie)?

[For fans of Polly, she placed David Cameron close to the far-right of the political spectrum but put Jeremy Corbyn closer to the political centre].

The remaining feature on Newsnight came courtesy of the BBC's everywhere correspondent, the omnipresent Gabriel Gatehouse. I've joked before about how he pops up everywhere, always sounding authoritative, whichever country he's reporting from. Here he was in Saxony in eastern Germany reporting on the "other side" of the German reaction to the arrival of massed numbers of migrants.

Like a number of other such BBC reports, Gabriel was careful to say that not all the anti-migrant/anti-Islamisation protestors protesting there are far-right, but his language was sufficiently clever to ensure that we took away from his report the fact that (a) some of these people are far-right and (b) that those who aren't "primarily" protesting for far-right reasons might be in danger of swelling the far-right.

Thus, Newsnight viewers might have been led to think that those objecting to the mass influx of migrants into Germany are mostly, to varying degrees, linked to the far-right....which is unlikely to be true.

Plus a Saxon security official was encouraged/allowed to say that if countries like the UK took their fair share of these migrants such feelings might not be arising...

...which arose in me the thought that if Germany hadn't invited in hundreds upon hundreds of 'refugees from Syria' en masse in the first place then Germany and the rest of Europe wouldn't be where they/we are today....not that Gabriel put that very obvious point to the official - or his BBC audience - at any stage in his report.

Talking of Philip Collins of The Times, this appealed to my sense of humour, so I thought I'd share: 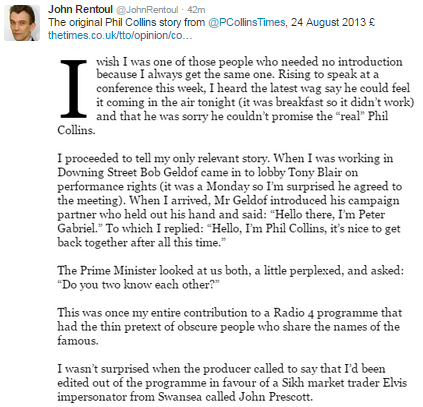