Thou shalt commit adultery, and the arrows that did affright the air at Agincourt

All course Radio 4's Sunday had some good things too, and I want to celebrate them (for once).

One feature focused on "one of the most famous printing errors in the history of publishing" - the story of 'The Wicked Bible' of 1631, which is (for some reason) is being sold next month. Prof. Gordon Campbell of Leicester University was the guest expert (and very good he was too).

'The Wicked Bible' was a reprinting of the King James Bible. It rendered the 7th Commandment as "Thou shalt commit adultery". (Hence it's other nickname, 'The Adulterer's Bible').

What I didn't know about this story is what happened to the printer. Well, the authorities took him to court. A fine was imposed but then commuted into an order to buy some Greek typefaces for the press. ("This was a very learned time!", observed Prof. Campbell). In time, however, the printer went bankrupt and died in a debtor's prison some years later. He was never released.

Here, disappointingly, the professor reminded Radio 4 listeners that 'ass' meant 'donkey' back then, not 'buttocks' but, he said, "it still verges on blasphemy to talk about God's donkey".

(The unfortunate bible, as you'll see from the image above, didn't get the other 'ass'-related commandment wrong - the one about coueting thy nighboars affe).

Prof. Campbell's reasoning behind his conspiracy claims are that: "One of these misprints could be a coincidence but two of them can't be a coincidence. So if you put the two together it's quite clear that someone is torpedoing the edition".

Now, William Crawley was obviously thinking what I was thinking at that point: Surely just two mistakes in the printing of the entire Bible doesn't add up to much.

Indeed, replied the professor, there were hundreds of insignificant misprints - 'and' was spelled 'aud' on 28 occasions, for example "but nobody cares" about them and "these are two are fairly central verses."

I'm not a lifelong expert on the King James Bible (hard as you may find that to believe) but I'm still not entirely convinced about this though. Yes, "Thou shalt not commit adultery" is a certainly a central verse, but is "The Lord our God has showed us his glory and his greatness" anywhere near as central? I don't think it is.

Juliet Barker focused on the topic of Henry V as a deeply religious king, specifically his "peculiar piety".

(It appears, from what she said, that Hal really lost his sense of humour after dropping Falstaff, Shakespeare was right about that).

Her report began with the Agincourt Carol.

She said it was peculiar that both the words and music survived. (Is it really?) It might possibly have been written by chaplain at the Chapel Royal who accompanied him in daily life and also went on campaign with him. Henry took 15 chaplains and 14 monks with him to France to serve his religious needs.

He also went on regular pilgrimages to shrines and heard three masses at the beginning of every day before going about his public duties (which makes three shredded wheat for breakfast sound positively wimpish). He was also devoted to lots of saints, many of whose banners he carried with him on the Agincourt campaign.

At the gates of Harfleur, after victory there, he took off his shoes and walked barefoot to the church of St Martin's in the centre of the port where he gave thanks to God on his knees. He gave God the credit for his victory at Agincourt too. "It's proof victory doesn't depend on a multitude of people but on the power of God" was apparently one of his favourite sayings. Henry saw it as a moral victory proving him to be the true king of England as God would never have have let him win that battle otherwise. It wiped out his father's stain of usurpation.

Juliet Barker said that there are unusually large number of chronicles about the battle and many eye-witnesses. The chronicles tend to comment on how pious the English were, kneeling down and praying before the battle.

And, according to Juliet, criminal records of the time give this further credence: Some months after the battle two Welshmen were arrested for causing an affray in East Anglia. Their indictment says there they were there on pilgrimage in fulfilment of vows they'd made on the battlefield, thus proving the truth of the chronicles' claims of English piety - well, sort of (if you ignore the affray part of the story). 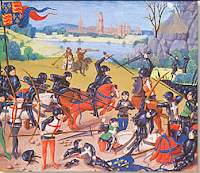 Oddly, I expected the BBC to be quivering with Guardianista qualms about Agincourt, accusing Henry of war crimes and UKIP-like Little Englander xenophobia. Unless I've missed it, it doesn't seem to have happened.

And odder still, the only example I've read of just that kind of denunciation of Henry V comes from a writer I associate with doughty defence of conservative takes on British culture and history - Ed West. His Catholic Herald piece is an onslaught against Henry. It's a compelling onslaught too and well worth a read - tomorrow!

Incidentally, a very beautiful service to mark the Agincourt victory followed. It came from the Chapel Royal. Well worth a listen, if you're into that sort of thing - or if you enjoy gorgeous English choral music.

All that's missing from this post (besides any mention of BBC bias) is Brian Blessed. If only he were here now to bellow out the line, Cry 'God for Harry, England, and Saint George!' As he isn't, you'll just have to imagine him doing so instead.
Posted by Craig at 16:17