Andrew Marr's show has had a bit of a facelift.

As he put it himself, it's now "a bit brighter, a bit more spruced up". It's also a heck of a lot more orange (which could cause problems whenever Peter Hain is on the show), though Andrew later described it as "peach" - which means I might need to go to SpecSavers.

There's even a new title sequence, closing with a cheeky smile from Andrew and a mysterious hand gesture (a disguised, anticipatory two-fingered salute to Robert Peston maybe?).

Other than that. it was the same old same old - politicians past and present, a couple of journalists, an actor and some music to close. (Will Robert Peston by interviewing Hollywood stars on his show? I do hope not. Hopefully, there'll be some proper old-fashioned Punch and Judy though). 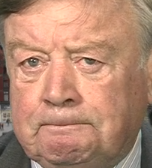 First up was Ken Clarke - a choice that didn't go down well with everyone:

They began by recalling Geoffrey Howe, who Mr Clarke credited more than the Falklands and an unelectable left-wing Labour leadership for helping the Conservatives win in 1983 by turning around the economy.

Then it was straight onto the government's cuts to tax credits and how they will hit hit ordinary hard-working people most of all. Some on the Right tend to forget just how 'dry' Ken Clarke is on economic matters. He gave a robust defence of George Osborne's changes - the best defence I've yet heard.

Then Andrew asked him about David Cameron's "four key demands" to stay in the EU. I think it's safe to say that Andrew himself doesn't think very much of them!

I don't disagree (and Fraser Nelson said much the same later) though whether he (an impartial BBC presenter) was right to express such an damning take on a government initiative is another matter entirely.

Mr Clarke, however, thinks they're "sensible", "fine", "valuable" and "achievable" (which probably won't endear the PM's "key demands" to Conservative Eurospectics). He then launched into making the pro-EU case (and attacking Nigel Farage).

Andrew Marr then asked him what he made of Theresa May's "rhetoric" over immigration. He replied that the tone of the speech was "all, all wrong". (Mr Marr attempted no devil's advocate defence of Mrs May or counter-argument in response).

Then they talked about the timing of the EU referendum. Mr Clarke went on the attack against Eurosceptics. 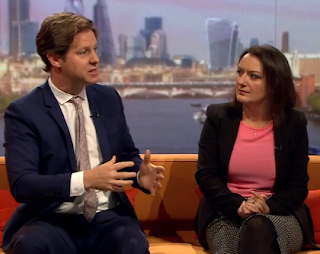 Then came the paper review. Fraser Nelson of the Spectator was to have been accompanied by Tina Brown, formerly of Vanity Fair and The Daily Beast but she got caught up in traffic, so BBC political correspondent Susana Mendonça took her place.

Susana, having leaped into the breach, did OK. She was a bit reserved to begin with (probably understandable nerves) and avoided saying anything controversial or giving an opinion. She did come out of her shell though when the subject of Nadiya came up:

Susana: Well, I watched Bake Off and it was just one of those key moments I think in TV history. We were all watching it. You know, it had millions of viewers and you had Nadiya creating that wedding cake with the sari theme around it, that Best of British, and...

Susana: She really has. So we've got here in the Sunday Telegraph, it talks about how she says she has to kick her husband out of the kitchen and, you know, she's somebody who's got young children, she's a mum, she's...Throughout the whole of the series she was somebody who, you know, came up with lots of witty lines. People really warmed to her. She's from a Bangladeshi background and all of that. She's very much about multicultural Britain. And certainly a lot of papers have been talking, you know, her as a British heroine now.

"One of those key moments I think in TV history"? If you say so, Susana.

Incidentally, one of her latest re-tweets ("Retweets are not endorsements") runs as follows:

Next up came Nicola Sturgeon, and for those monitoring how Andrew Marr introduces his guests, this is how he did it here:


Now, it's a year since the Scots rejected independence but the result of the referendum only seems to have to have strengthened the SNP, almost sweeping the board in Scotland during the general election and enjoying a huge surge in membership. But everything is not entirely rosy. Next year the party has to defend its record in the Scottish parliamentary elections and one of its new MPs has been caught up in allegations over property deals. I discussed all of that with the SNP leader and Scotland's First Minister Nicola Sturgeon while she was on a flying visit to London.

I thought that was pretty even-handed - as was the interview as a whole (though tougher than I expected). 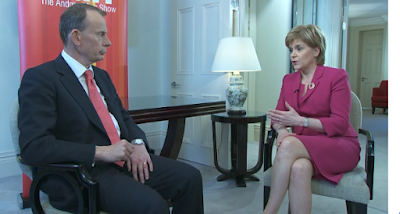 He started though with the question of a second referendum. Then he asked her about the Scotland Bill, her George Osborne's separate austerity plans and Jeremy Corbyn. Things were proceeding pretty gently. Then came a toughening-up of Andrew Marr's questioning as he turned his attention to the SNP's record:

You’ve talked a lot about your record as the SNP but there are more and more voices now saying it’s not such a great record. Why is it for instance that the number of kids from disadvantaged backgrounds in Scotland who go to university is half the number than in England?

He began interrupting and challenging, with more such questions, such as:

Numeracy and literacy rates in primary school, in primary four and primary seven, among poorer families are shocking and getting worse.

We could range across lots of policies. Let’s just do one other one, which is the amalgamation of the eight police regions into the new Police Scotland, which has not given you the savings that you wanted and has produced some terrible stories about 999 response rates. And you’ve lost the guy in charge and so forth. That has not gone well.

Here are some of the Twitter reactions to this interview:

Maybe a tally out to be kept in the run-up to the referendum as to the balance of guests. Today's tally would be 2 for us staying (Ken Clarke and Richard Reed) and 1 for us leaving (Richard Tice).

We'll have to wait and see if a pattern of bias emerges.

Both Richards enjoyed themselves, and the bits where they debated between themselves make me optimistic that the referendum debate could be a passionate but hate-free affair.
Posted by Craig at 14:16