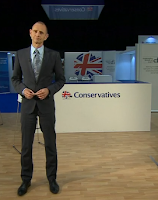 ...though its initial focus was more on Jeremy Corbyn and the protesters outside the conference than the Conservatives conferencing within.

"The most remarkable thing of the day" was Mr Corbyn turning up to protest in person, said Evan Davis. For Evan, this was "a sign of just how different and just how divided politics is at the moment", a "culture clash that's now so evident in British politics".

He spoke to some of the anti-Tory protesters, who said that very few of them were spitting or throwing eggs. (Evan called some of the protests "vicious").

Then came "the star", Jeremy Corbyn, turning up and speaking outside another party's conference. "It shows just how hot the political argument's getting in this country", said Evan.

I have to say I do wonder about that. The Corbynistas may be getting hot and Labour politics may be divided and different, but are the general public in any different place (or mood) from where they were at the election? Is Evan still trapped inside his BBC/Westminster/Twitter bubble?

Next, however, was a pre-recorded interview with David Cameron - his first with Newsnight since that election win.

Evan began by asking him if there's anything he likes about the new Corbyn leadership. Isn't he [Jeremy Corbyn] more "straightforward" than other politicians?

Next came a whole string of questions on the cuts to tax credits. Evan grow lively at this point and gave the PM a hard time, repeatedly interrupting him and challenging him on the detail (using the IFS against him) and focusing on whether he had been straightforward about the issue during the election, arguing that he hadn't been straightforward at all, building up to this moment:

It doesn't seem like it was a terribly straightforward approach and I put it to you again that this is the kind of thing that gives politics a bad name.

Of course Evan may very well be right about that - especially in this instance. I think he showed that the Conservatives had been economical with the truth before the election on the issue of tax credits and the PM did seem (to me) to be obfuscating.

The "new politics" angle continued in the next section...and Evan had just used that term when David Cameron interrupted him to mock the idea, saying that Jeremy Corbyn is "very old politics".

Anyhow, Evan's next subject was old Etonians in front line Conservative politics. The selection of old Etonian Zak Goldsmith to as the Conservatives London mayoral candidate risked showing the Tories as "very out of touch", suggested Evan. "You've done it again, haven't you?", he asked. There are 20 Tory MPs from Eton, he continued. "Shouldn't the next leader come from a state school?", "Do you send your own son to Eton?" 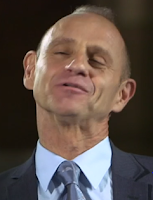 So, the interview lasted just under 15 minutes and three subjects were chosen by Newsnight for discussion, with the overall theme of 'straightforwardness' (contrasting Jeremy Corbyn with David Cameron) running throughout.

Was this biased? And if it was, how?

Do you have to be a right-leaning voter (sympathetic to the Conservatives) to find the choice of subjects - the straightforwardness of Jeremy Corbyn as contrasted to the obfuscation of David Cameron, the Tory cuts to tax credits and the class war issue about old Etonians in high Tory places - strongly biased against the Tories?

Or was it right that those cuts to tax credits was made the main issue by Newsnight, largely to the exclusion of everything else, because that is (some think) the most contentious domestic issue at the moment (and, frankly, they seem seriously misguided to me too)? As isn't the strange power of that school over British politics astonishing and disturbing?

I didn't check out any of the Twitter reaction to this interview. Surely not even the most determined or demented left-winger on Twitter could possibly have found this interview pro-Tory/pro-government. That's one bias that can absolutely be ruled out here. 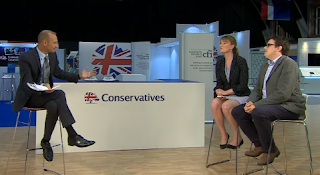 After a short bit on George Osborne's conference speech, featuring Newsnight's policy editor Chris Cook talking about the Chancellor's planned reforms of local government finance (fairly outlining the pros and cons) and Newsnight's political editor Allegra Stratton talking about "any blots on the landscape, any clouds on the horizon"....

Allegra talked about the tax credit changes. "It's really sticky", she said. "The bigger, blonder blot, however," she continued, "is Boris Johnson". Boris is also against those tax credit changes, she added. "My view is it's a question of when not if they move to soften the blow", she predicted.

Yeah right, like Newsnight would ever pass up the chance to gossip about who's up and who's down in the main Westminster political parties! Even if there hadn't been a Conservative Home news letter, they'd still have been at it!

Cue Allegra, wandering around the conference, encouraging people to gossip about it. She also felt the need to start by saying, "It's no some media parlour game, dreamed up by jaded journalists....the Prime Minister started it". Yeah, sure! So that's your cue to keep on about it, Newsnight - just like you would have done if he hadn't said he was retiring towards the end of this parliament.

Boris: Can I just say something very seriously actually. You're babbling on about these vanishingly trivial subjects...
Allegra:  That's what I'm paid to do, Boris Johnson!
Boris: ...that doesn't become relevant for four years...

Well said, Boris - though in fairness to Allegra Stratton, she wasn't wrong either! 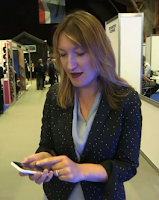 
This is boring, wasteful and gets in the way of proper political journalism. I sense awareness on the part of your journalists that they know they are going on about it too much.

On Newsnight, journalists were going out of their way to make out this was something that interested delegates to the conference and was not just a media obsession. Their insistence on this merely confirmed the opposite.

Next, should the Conservative turn to the radical right or move to the centre?

Evan went walkabout, talking to the delegates and former MPs. People seemed to reject the premise of his question.  "I think that was me learning that there's a problem with binary questions in a non-binary world", he said afterwards before pursuing exactly the same question (!) with Mrs Thatcher's biographer Charles Moore, Rachel Sylvester of the Times and Andrew Rawnsley of the Observer.

As a panel they were quite balanced between the centre-right (Charles Moore), the centre-left (Andrew Rawnsley) and the sort-of Cameroon/Blairite middle (Rachel Sylvester).

This edition ended with a tribute to Denis Healey. Newsnight often pays tribute to fallen heroes of the Left, and this was a handsome tribute.

Newsnight has been to his Sussex home "many times" over the years, said the programme's Lewis Goodall. 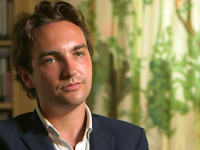 (Incidental fact: Lewis used to be a researcher at the centre-left think tank the IPPR before joining the BBC. He's never worked for the Guardian though, which is something!).

Evan had already assured us that Denis Healey never said "We'll tax the rich till the pips squeak" and, less surprisingly, never said "Silly Billy!" either (until after Mike Yarwood used it in his impersonations of him).

Today, of course, we learn that - by a curious twist of fate - the target of one of Lord Healey's most famous barbs has died, namely Lord Howe.

Denis Healey, of course, said that being attacked by Sir Geoffrey was ''like being savaged by a dead sheep.'' Less famously, Sir Geoffrey gave a very delayed (and good-humoured) riposte that's quite funny too. When the Labour man congratulated him on becoming Foreign Secretary in the late 1980s, Sir Geoffrey described the experience as ''like being nuzzled by an old ram.'' (By all accounts they became friends in their later years).
Posted by Craig at 18:08