Only a little spark

The Today Programme this morning (17 mins to 8) brought us Kevin Connolly’s report from Jerusalem about the shooting of an Israeli couple, by Palestinians. The couple were in their car with their four children when a Palestinian car drew up and shot at them, killing both parents.
This was the first I’d heard of it, and I wondered what impression Kevin Connolly intended to give. 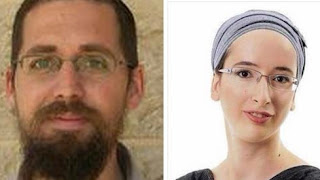 I’ve listened again, and I still perceive that the reporting we’re  getting from Kevin Connolly is ‘news from the Palestinian point of view’. If you like, it’s events seen through the Palestinian prism.

Connolly certainly seems to identify with the Palestinians, though he probably distances himself from the ‘religiosity’ of both the Israelis and Palestinians, whom I suspect he regards as equally religiously fanatical.

The impression I had was that Connolly was keen to imply “they had it coming to them’  because of the way he described the location of this murder.

“a dark country road between two Jewish settlements in the occupied Palestinian territories, the nearest big city being Nablus.....”

That insinuates that the Palestinians were defending themselves against ‘settlements’.

On the other hand, it could be seen as essential background of the type we complain about when context and background are omitted from cases where the scenario is reversed.
Nevertheless, it seemed inappropriate because of the brutality of the act.

“and of course today it is friday prayers here in Jerusalem”

Well, it is “friday prayers,” - for Muslims -  and the 'rising tensions' he alludes to is something that has been woefully under / mis reported by the BBC ever since it escalated into a major powder keg.

“we were just going back  through our own news archives, it’s far from scientific, but we would say that more than 20 Palestinians have died in political violence on the West Bank this year, at least a half a dozen Israelis.”

Who, might I ask, is “we”? Be that as it may, why bother telling us this? It couldn’t be, could it, to remind us that Palestinians are more deserving of our sympathy than Israelis? It’s the same old death-toll syndrome. How many died?

What it fails to address is that most of the Palestinian fatalities at the hands of the IDF have been provoked or initiated by some kind of direct, threatening behaviour from the Palestinian, which is usually reported in the ‘last first’ tradition.

“.........one of the times of year when Jews traditionally make a pilgrimage to Jerusalem, that means, of course, that they move towards the Western Wall in the old city, that means they’re close to the Al-Aqsa Mosque compound, many in the Arab world see that as a kind of attack on their religious identity..........”

The Al-Aqsa mosque ‘status quo’ would seem almost unbelievable and inexplicable to any sane person, if reported impartially, or at least not through the Palestinian prism.  It would seem inexplicable that the Israelis would, a) tolerate it, and b) that the world would think it was okay.

The history - how the present situation has arisen - the Israeli government’s policy of appeasement, the unfounded rumours perpetrated by Palestinian agitators, the whole lot of it has been given the BBC treatment, so that we have actually been told (in several previous reports) of the Palestinians‘ fears’ as if their unfounded fears had as much credibility as the factual occurrences they are supposed to be reporting.

“Al-Aqsa is one of Islam's holiest sites and is in the Temple Mount/Haram al-Sharif site also revered by Jews.”

I’m not a religious person, but I do know that this site is known as the third holiest site for Muslims, and ‘the’ holiest for Jews.  Why twist it?

“it takes only a little spark, like last night’s killings, to ignite it.”

Well, I’d hardly call the cold-blooded murder of two people in front of their young family “only a little spark”

The Times of Israel has more details.

and if you want to see a report that starts off on an even more uneven keel, see this one,
headlined:
"Israel sends troops after settler couple killed in West Bank"
Which manages to combine ‘last-first’ and “gratuitous settler” in the space of ten words.

At least, way down the page, the BBC report had:

“The Palestinian militant organisation Hamas, which is dominant in Gaza, said "we bless the killing of settlers in the West Bank".

“Spokesman Husam Badran said: "We call on our people in the West Bank to carry out more quality operations like the [one] today."This is the only solution which is supported by the masses of our people everywhere."

Naughtie:
“The Israeli army is searching for the killers of an Israeli couple who were shot dad in their car in front of their four children and hundreds of soldiers are now being deployed close to Nablus in the occupied West Bank.

Kevin Connolly on the line from Jerusalem.

“Well this married couple Eitam and Naama Henkin they were driving on a dark country road between two Jewish settlements in the occupied Palestinian territories, the nearest big city being Nablus, when they were fired on from a passing car.
Now the parents were both killed, they were pronounced dead at the scene, but remarkably their four children aged between nine years and four months old, they were all in the back seat of the car, they were all unhurt.
I mean it’s a hugely traumatizing incident of course - immediately the area was flooded with emergency services and with soldiers. There is an intensive search going on, part of the role of the soldiers too is to try to keep a lid on rising tensions, which of course you always see in the aftermath of this kind of shooting, and of course today it is friday prayers here in Jerusalem so that there’s also a huge police operation around the old city because any killing like this does immediately produce a predictable rise in sectarian tensions.”

Naughtie:
“And of course it’s a tense moment well it’s always a tense moment, but we’ve had this week Prime Minister Netanyahu saying that he would restart negotiations with the Palestinians immediately without preconditions but the Palestinians weren’t interested and we’ve had President Abbas and the PA  at a flag-raising ceremony at the UN saying he’d more or less given up on the Israelis. I mean episodes like this coming in the middle of it all just make it more and more  unlikely there’ll be any progress.

Connolly:
I think that’s right, I mean I sometimes think, Jim, that the politics of it all feel as though it’s going on as a kind of abstract, almost in the background to the sectarian realities on the ground. I mean we were just going back  through our own news archives, it’s far from scientific, but we would say that more than 20 Palestinians have died in political violence on the West Bank this year, at least a half a dozen Israelis. Often there’s a level of tension that bubbles away somewhere below the level, frankly that you need to make global headlines.
This week it’s the Jewish religious festival of Sukkot, that’s one of the times of year when Jews traditionally make a pilgrimage to Jerusalem, that means, of course, that they move towards the Western Wall in the old city, that means they’re close to the Al-Aqsa Mosque compound, many in the Arab world see that as a kind of attack on their religious identity, that ratchets up the tension too, and of course the basic truth of this place is that the kindling you need to start these kind of fires of sectarian violence is lying around somewhere to hand all the time and it takes only a little spark, like last night’s killings, to ignite it.