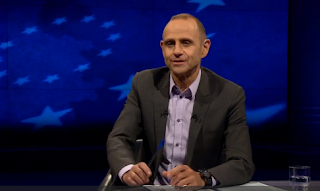 Feelings of déjà swept across me. The focus was on Europe and potential Tory splits - as seems to have been the focus (on and off) for the past quarter of a century.

My memory is failing me here but I'm pretty sure I read recently that someone big at the BBC had admitted that the BBC spent too much time concentrating on Tory splits during the Major years and had paid too little attention to discussing the substantive issue of Britain's membership of the EU itself. (Can anyone help with a source here?) My memory is telling me that the implication of that was the BBC would strike a better balance now.

[Update: Thank to David Keighley, I now 'remember' where I saw it. (David's memory is clearly much better than mine.)

Well, we'll see! Starting with this edition of Newsnight...

Yes, began Evan, the Tories are feeling chipper at the moment but they aren't masters of all they survey and "now have to walk across a mine-infested field called Europe". "The divisive issue could still split the party apart", he continued. Ah.

Then Allegra reported from the conference. "The Tory Party is right now obsessed about the EU referendum", she said at the start.  If David Cameron doesn't bring back significant concessions from Europe "a heck of a lot" of Conservatives will stop backing him. she said at the close. Ah.

As for other events, Theresa May's speech was, said Allegra, her "hardest line" yet on immigration. "She shocked people outside the hall by talking in very hard line terms on immigration", she added. Mrs May was out to "woo and wow" the Tory faithful, she explained.

Damian Green, as I look at the two of you standing their so friendly to each other, very peacefully, there's is no way, is there, you're going to be on the same side in any EU referendum. 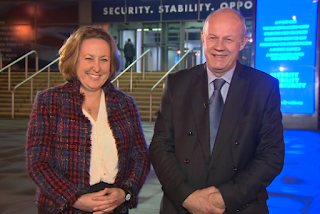 Incidentally, the remainder of that question to Mr Green ran as follows:

I mean the Prime Minister's never going to get what Anne-Marie Trevelyan's asking for. She's asking the Germans and French to dismantle the EU basically.

As Damian began answering, Anne-Marie pulled a face and said, "No" (as if she felt Evan was misrepresenting her position).

And Evan's closing question was:

Anne-Marie Trevelyan, do you think the Prime Minister, just in a couple of sentences, do you think he can keep the party together with any kind of realistic deal. Come on!

So it was 'Tory splits' to the very end, wasn't it?

And I'd bet the BBC's coverage will stay like that, just as in the Major years. Nothing will change.

Then Newsnight moved on, very briefly, to another big issue (from 'Tory splits' to 'Tory cutz'), though again hinting at a possible 'Tory split' here too (or at least that's how I heard it):

Meanwhile the other thing causing problems at the Conservative conference is the impending cut in tax credit entitlements for millions of low income families. working families of the kind the party says it now sees itself as the party for. Boris Johnson in his speech put himself on the side of those families today. 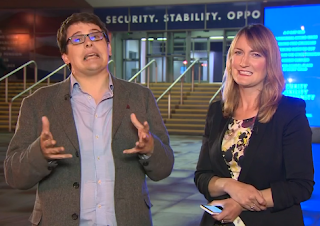 And so (as she's been given an advanced copy of the speech) it turned out to be. (Why "I'm afraid to say" though?)

Then it was onto President Putin and Syria.

Mark Urban's report used two talking heads: (1) U.S political analyst Cliff Kupchan on the Eurasia Group, who talked of Putin's "brass knuckles foreign policy". He said the Russian leader doesn't have an endgame and has "bought off a lot" (which I presume means "bitten off more than he can chew"); and (2) Dr Alex Pravda of Oxford University, who said that polls show 69% of Russians don't want to send troops to Syrian and there's even a 40/40 split on the issue of whether to send arms to Assad,

An interview followed with former Obama advisor Dr Philip Gordon. Evan asked him what he thought Putin was up to. Mr Gordon said Putin is supporting Assad because of (a) his opposition to regime change nearer to home and (b) his fear of what would follow Assad's fall. Evan then said that Western policy is "in tatters, isn't it?" Mr Gordon said. yes, it is has pretty much "failed" and that we need to think again. He seemed open to working with Russia if Russia could help de-escalate the conflict.

Was there any bias here? All of the chosen experts sounded measured, though none sounded anything other than sceptical about President Putin's chances of success, or his motives in doing what he's doing.

Then it was onto the film that has got the left-liberal parts of chattering classes chattering (and if they're chattering then Newsnight is bound to be chattering too): Suffragette. 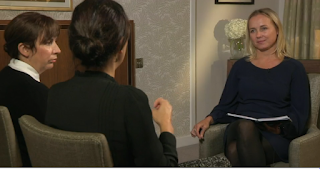 Katie Razzall talked to the film's director Sarah Gavron and writer Abi Morgan about why its story of the struggle for equality "is still current". Abi said that "basic pay inequality, appalling work conditions, sexual abuse and violence at home and at work, parental custodial rights" are "21st Century issues" - though Katie concentrated on more urgent matters, such as only one-fifth of the films being shown at the London Film Festival were directed by women. "In their industry equality is still a long way off," said Katie.

And to end came an interview with Wikipedia founder Jimmy Wales. When I closely monitored Newsnight for a few months a year or two ago I found that Newsnight was unusually keen on technology and social media stories, so an interview with Mr Wales was par for the course (and he's always interesting).

This appearance, however, was more in support of a cause he's strongly campaigning for at the moment - the campaign to free Saudi pro-free speech blogger Raif Badawi, whose brutal public flogging by the Saudi regime has appalled many.

Given that the final edition of Newsnight this week also dwelt on the human rights failings of the Saudis (and all the controversy over its recent coverage of Saudi 'war crimes' in Yemen), it's interesting that this edition pushed a similar point. Newsnight definitely seems to be on something of a mission to critically investigate Saudi Arabia at the moment.

All power to Newsnight in that, I'd say - if their motives are honourable. Saudi Arabia deserves to be investigated by the world's media. (Hopefully they'll be taking on the Iranian regime next).
Posted by Craig at 18:09