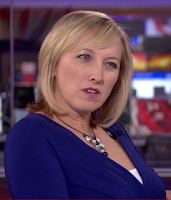 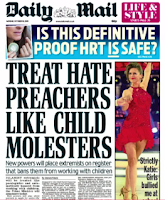 When Martine Croxall ran through the front pages in advance of that discussion her voice sounded a striking note of incredulity when she came to that Mail headline (listen for yourselves, beginning at 1.23).

Was she sounding incredulous about the Mail's journalism or the government proposal itself (or both)?

Fast-forward to that closing discussion about it, with academic Zamila Bunglawala and Tom Bergin of Reuters (beginning at 11.15).

Both guests cast considerable doubt on the story and the proposal, which Zamila described as "misleading" and "disturbing". She also questioned how you can define extremism and feared that it might have a negative effect on the employability of people appearing on the government's planned list of convicted terrorists and extremists who shouldn't be allowed to work with children.

Martine agreed, adding "No, you can imagine all sorts of legal claims coming to court, can't you, if you're on a list of extremists? What's the proof?", before ending the paper review: "That's it for the papers tonight."

And that was it for the government's new plan to tackle extremism too - soundly trashed by all and sundry here, the BBC presenter included.
Posted by Craig at 09:58