Look who Edward Stourton got to meet!

Having been somewhat out of action in the past couple of weeks or so, I've missed out on my weekly ramblings about Radio 4's Sunday, where I complain about what Edward Stourton said to the bishop ("David Walker, Bishop of Manchester, that's a lovely pair of creamy buns you've got there, but am I right in thinking that you believe the government's benefit changes to be wrong in principle as well as being harmful in practice?").

Last week's edition was a particularly odd one for me to have missed, given that I've long said, with some evidence to back it up (if I say so myself), that the programme often feels like audio version of the liberal Catholic magazine The Tablet - given the programme's intense focus on Catholic matters and the overwhelmingly liberal perspective it takes on most issues.

I've even joked on a few occasions that Edward Stourton (the liberal Catholic Tablet trustee who is the programme's main presenter) has come to sound like a Pope Francis groupie, given the good press he gives the present pontiff (unlike his predecessor) and his tendency to open the programme with the words, "Pope Francis..."

Anyhow, back to last week's edition - a Sunday special devoted to just one subject. Here's what it was about: 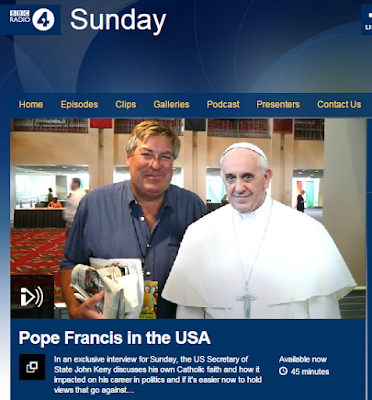 Yep. As someone once said, "You couldn't make it up!"

Except for the occasional Christmas/New Year special or live broadcast from a mosque (or a one-off immigration edition), a 'special edition' of Sunday tends (by my close reckoning) to mean an edition devoted to something Catholic-related. We've had 'specials' to mark Pope Benedict's visit to the UK, the anniversary of Vatican II, the inauguration of Pope Francis and the beatification of John Paul II. And now, as I say, came this 'special' devoted to Pope Francis's visit to the United States.

Is it a harmful bias? Probably not, It's even a bit surprising and strangely endearing. But a bias it very much appears to be nonetheless, doesn't it?

To be fair, last week's programme was both interesting and quite balanced. Only the closing, summarising discussion was wholly given over to liberal Catholics (in the old way of Sunday)..

Then again, me finding it interesting probably says a lot more about me than it does about the listening Radio 4 public at large.

Such things do interest me. The BBC's own research, however, shows that I'm not a typical Radio 4 listener in that respect. Most of them aren't interested in religion very much at all, it seems: 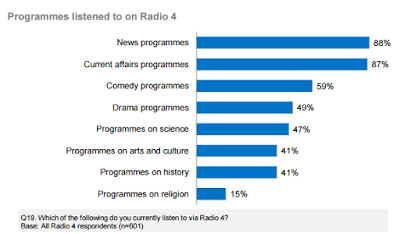