I read an article in The Sunday Times this week reporting that polls in Germany "have turned rapidly from enthusiastic support for Merkel’s 'welcome policy' to concerns over how the country can cope", with a majority now (51%) believing "the wave cannot be managed".

I wondered when the BBC would report this. Well, this morning it has.

There's a piece on the BBC News website by the corporation's Europe Editor Katya Adler, Brand Merkel comes under pressure over migrants, which reports the growing concerns of "Angela Merkel's core voters: the comfortable middle classes, now plagued by doubt and insecurity":

To be clear: most Germans don't question a duty to help those fleeing war or human rights abuses but they do find the huge number of arrivals unsettling.

Housing seems to be the main specific concern, though the sheer numbers expected are obviously the underlying issue.

Strikingly, a lot of the highest-rated comments below the article take on the BBC's biased coverage of the migrant crisis in general rather than Katya's piece itself (and, so far, the BBC moderators aren't deleting them en masse); however, there's something about her article that is drawing criticism (though it's likely to be the fault of an BBC online editor rather than Katya Adler herself):

Yes, despite the fact that the vast majority of migrants/refugees entering Europe are fighting-age Muslim men, these were the images chosen by the BBC to illustrate the migrant crisis in this article: 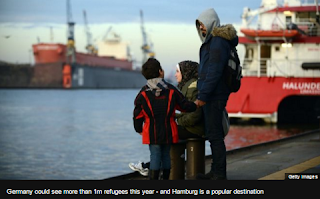 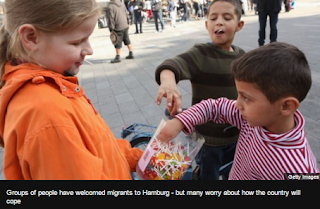