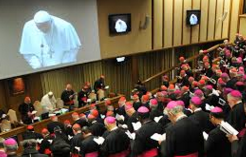 Fans of Radio 4's Sunday will have expected it to discuss the Vatican's Synod on the Family this morning, and indeed it did.

Did it live up to Damian Thompson's widely-quoted statement (well, by me at least!) that "Radio 4's Sunday programme offers perhaps the most undiluted liberal bias to be found anywhere on the BBC"?

The language used by presenter William Crawley struck me as quite revealing. He could have begun by saying:

After weeks of tense and, apparently, intense deliberations the Vatican's Synod on the Family has spoken. There may be changes to Church policy towards some divorced and re-married Catholics who are currently excluded from communion but no change to the Church's stance on homosexuality. Have the bishops in effect voted for business as usual?

...but what he actually said was:

After weeks of tense and, apparently, intense deliberations the Vatican's Synod on the Family has spoken. There's new hope for some divorced and re-married Catholics who are currently excluded from communion but no softening of the Church's stance on homosexuality. Have the bishops in effect voted for business as usual?

Still to come this morning - After the Vatican's Synod on the Family is a new kind of Catholic Church emerging? Or will it be more of the same?

In the end the Synod Fathers have agreed a document that largely restates the Church's current teaching on many of the sensitive issues it was considering. It resisted the opportunity to use more welcoming language of gay and lesbian Christians but they have opened the door to a possible return to full communion for some divorced and re-married Catholics.

Such language - in this case "inclusive" - was also being used by the programme's Twitter feed, as someone else pointed out:

The programme also featured a report from senior BBC journalist Helen Grady, who was in Rome for the Synod. Does her contribution offer further evidence of "liberal bias" on the part of Radio 4's Sunday?

Well, here's how she concluded her report:

For me personally, the biggest surprise has been my own answer to the question that brought me here in the first place: Why on earth would Pope Francis ask for advice on the family from 300 celibate men? On Friday I was let into the Synod aula to observe the morning prayers and I still couldn't help but feel shocked by the total absence of women voting in the Synod. Even so, talking to bishops in the past few weeks, what I've found is that from dating apps to sperm donation, from housing costs to polygamy, they're really not as clueless as I expected.

I think we'll have to answer that with a 'yes'!

The closing discussion, however, featured two Catholics with differing perspectives - Father Alexander Lucie-Smith of the Catholic Herald and commentator John Thavis - so that can be considered balanced.

I did note though that William's questions weren't always as 'helpful' to Father Alexander than they were to Mr Thavis:

WC to Fr A L-S: Father Alexander, just picking up on that point again. You, a few week's ago, used the expression 'ferrets fighting in a sack' to describe the cardinals and the rumoured infighting. Any reasons now to moderate that judgement? [Fr Alexander apologised profusely for it in response].

WC to JT: John, do you think the Synod will also be remembered for the exclusion of women's voices from the voting processes on family issues that matter greatly to women across the world, especially given that there was a lay person, a male lay person, who was among those who was actually able to cast a vote? 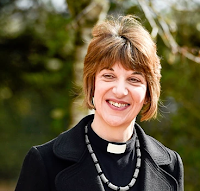 Talking of which, the programme began by discussing the arrival of the first Church of England woman bishop on the Lords Spiritual benches of the House of Lords. Rachel Treweek, Bishop of Gloucester, will take her place tomorrow.

William marked the occasion with the avowedly liberal retired Bishop of Oxford, Richard Harries (of Thought For The Day fame), asking if "diversity" could be further enhanced by giving some of the Lords Spiritual places to people of other faiths.
Posted by Craig at 16:17