Yesterday, Sky News was sending periodic reports from Jerusalem. They interviewed a female journalist from JPost to discuss the recent escalating violence and the outbreak of stabbings and shootings in the Old City. 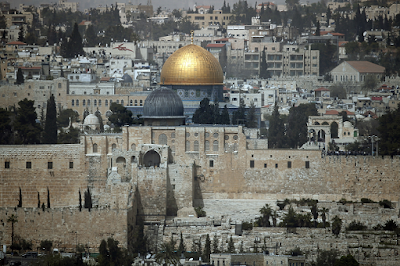 My understanding of the bizarre status quo with regard to Temple Mount / al-Aqsa is that Jews are allowed to visit the compound but are prohibited from praying there. (They do not wish to go into the mosque)
Rabbi Yehuda Glick is part of a movement that campaigns for the ‘no-pray’ restriction to be lifted; last year he was shot and seriously injured.  The Israeli government stated categorically that there are no plans to alter the status quo. Nevertheless the Palestinians claim there’s a plot afoot - to let Jews pray there, and to DESTROY AL AQSA.

Meanwhile, female Muslims are employed by the PA to harass Jews and tourists by screaming, ululating and and shouting the usual Islamic chant. Palestinian youths gather rocks and other ammunition and pelt Israeli soldiers from inside the mosque, their ‘third holiest site’. Violence has spread to the surrounding area.  Israelis have been stabbed by Palestinians; the stabbers subsequently shot by the IDF.

All the while Mahmoud Abbas has been ramping up the rhetoric, perhaps encouraged by the raising of the Palestinian flag at the UN and the apparent reduction of support for Israel by the US. He has been openly calling for violence against Israelis in that flowery, blood-flecked language they use.

Palestinian youths took Molotov cocktails and rocks into al-Aqsa to pelt religious Jews who they knew would be visiting for a religious holiday. The IDF rarely venture into the Mosque, but are occasionally forced to do so to dampen down extreme violence.

This was roughly what the Jpost journalist explained to the Sky anchor Samantha Simmonds.
When she had gone, along came Ghada Karmi, who is beginning to look madder than a hatter. She was incandescent with rage, and got away with an execrable, preposterous and fanciful diatribe, which she repeatedly insisted was ‘fact’. I think she must have been chatting to Ali Abu-nimah of E.I. who also gets reality and fantasy mixed up. 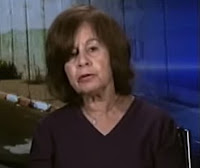 Kharmi, quivering with fury, said that the violence was caused by armed fanatical religious Jews forcing their way into the al-Aqsa mosque and demanding the right to pray inside. She kept stating that this was fact. She insisted that a mob of religious Jews had stormed, not the compound, the actual Islamic mosque, armed with fireworks and rocks.
(Why would Jews even want to pray in a mosque?) Oh yes, they’re going to destroy it and supplant it with filthy Jewish stuff. Fact.

What a travesty. The only armed fanatics inside the Islamic ‘holy’ mosque were Palestinian hooligans, whipped up by Mahmoud Abbas’s incitement, after being bolstered by the symbolic flag-raising malarkey at the UN.

Saddest of all was that Samantha Simmonds let it all go unchallenged.