‘Can we always talk about Europe rather than EU?’ 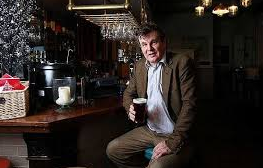 Many things can be said about Peter Oborne (and we've said quite a few of them here), but I'll raise a glass to him this time (yes, I know it's a bit early in the day) for this concisely-put complaint in today's Mail:

The BBC was guilty in 1975 of gross pro-Brussels bias during the referendum over whether to stay in what was then the European Economic Community.

It is vital that the state broadcaster shows fastidious even-handedness between the ‘Yes’ and ‘No’ campaigns during the run-up to the forthcoming EU referendum.

Unfortunately, the BBC finds it very hard to break away from its innate pro-European bias.

‘Europe’ and the ‘EU’ are completely different entities. Not even the most ardent ‘Yes’ campaigner can change geography — there are 20 European countries that are not part of the EU.

Disgracefully, it seems BBC News staff are doing the work of pro-EU campaigners such as former Tory MP Laura Sandys, who says: ‘Can we always talk about Europe rather than EU?’

The BBC is failing in its statutory duty if it doesn’t treat both sides of the Europe argument fairly.

Labour's Kate Hoey, however, put it even more concisely four months ago: