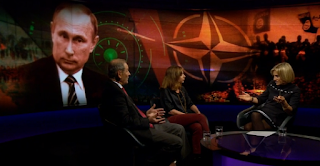 Vladimir Putin's intervention in Syria was first up on Thursday night's Newsnight.

As a blogger about BBC bias I'm supposed to check for any patterns of bias and point them out to you (our readers) if I find any.

Well, see if you can spot a pattern here:

The main 'talking head' in Mark Urban's opening report was (anti-Putin) Ukrainian president Petro Poroshenko. Then came an interview with the head of NATO, Jens Stoltenberg  (also no friend of Putin), Then came a studio discussion between former UN ambassador Sir Jeremy Greenstock (who is critical of Mr Putin) and the FT's foreign editor Roula Khalaf (also no admirer of Mr Putin).

So I won't make that claim at all,...and maybe I'll just stick with saying that Newsnight's coverage certainly wasn't sympathetic towards the Russian leader at all, to put it mildly.

The next segment began with Emily saying, "The former prime minister Gordon Brown said the European Union could be put at risk if those who want to leave are allowed to pose as what he called 'the sole defenders of Britain'".

That was the prelude to a chat with Allegra about the launch of the pro-Brexit 'Vote Leave' campaign the following day. A clip from their campaign video and a short clip from an interview with their media spokesman Robert Oxley was framed by Allegra and Emily's conversation.

Was there any bias here (in any direction)? Well, nothing I can quote, though the tone struck me as somewhat unconsciously revealing - a slight sighing scepticism of tone followed by laughter and quips (of a slightly mocking kind) at the upbeat campaign video. 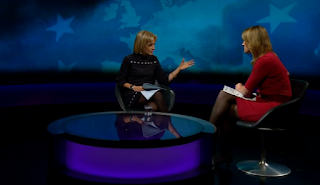 Then Allegra made the following statement:

British public opinion on Europe is a bit like a Christmas cracker. You have 30% on the end that believe we should leave come what may. You have 30% in the middle that are undecided. And at the other end you have 30% that is quite keen on remaining.

That was a striking image.

Naturally, I immediately totted up the percentages and wondered about the missing 10%. Was that an example of a BBC reporter being innumerate?

Also, when someone presents one 'end' as "believing" we should leave "come what may" (i.e. as reckless fanatics) and the other 'end' as being "quite keen on remaining" (i.e. positive, reasonable and open-minded) my bias detectors start seriously twitching. I think I can guess which way Allegra will be voting - what with her being so positive, reasonable and open-minded.

Next came a discussion about presenting budgets (and the EU referendum), presented by Newsnight's (former FT) policy editor Chris Cook, with Lord Lawson (Conservative) and Alistair Darling (Labour). It was almost light relief and I couldn't find much bias in it, though I suspected Chris of trying to fish out some uncomplimentary comments from his guests (especially Mr Darling) about the new Labour leader.

Next up a story about how a bunch of prisoners in the US beat a set of Harvard scholars in a debate.

My first thought was: Aha! a Guardian-type story about elitism in the US being 'done one over' on by the underclass! 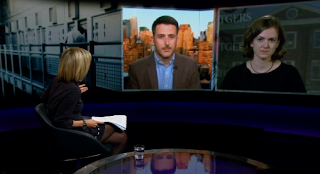 As the story was being introduced, however, I noticed (BBC Three racism hunters take note!) that all of the Harvard losers appeared white while three out of four of the winning prisoners were black. Was Newsnight about to obsess about race angle again?

Then Emily outlined the motion of the debate: "The children of illegal immigrants should be denied access to free schooling".

Here I stopped in my tracks. Surely the Harvard types would oppose such a motion. (I imagine Harvard types to be overwhelmingly liberal). So would Newsnight actually be defying my expectations of them and celebrating the victory of a team that argued that the children of illegal immigrants should be denied access to free schooling? Really?

Of course, it was more complicated than that. On Googling around it transpires that the inmates were indeed backing that unexpected position, but they were doing so despite personally opposing it - i.e. they were brilliantly playing devil's advocate (so no harm done as they didn't believe it). A safe story for Newsnight after all then.

Further checking online, this story has been a big story (for three days) at...the Guardian. I've checked quite thoroughly and the Guardian does seem to have been the only UK media to make a lot of this...other than Newsnight.

So, yes, after all, it was a case of "Aha! a Guardian-type story about elitism in the US being 'done one over' on by the underclass!" Presumably Ian Katz read it in his old paper and thought, "Great story. Let's do that!"

And if you thought that reeked of BBC/Guardianista sensibilities then the final item absolutely stunk of them.

Yes, it was all about the latest BBC/Guardianista obsession: transsexuals and transitioning gender - and normalising transexuality.

(Apparently, from what I've read elsewhere, BBC One's Eastenders is being used to push this angle too.)

This Newsnight report by Cat McShane (complete with emotional music) was wholly sympathetic and one-sided (and featured an attack on a Murdoch paper for being unsympathetic), propagandist even...

...and here I get into a moral quandary because I'm as liberal as anyone at the BBC about such things. I understand. I sympathise. I wish them well...

...but this report had such an agenda, such a palpable design on its viewers, that my hackles were somewhat raised by it - particularly by Cat's ostentatiously virtue-signalling commentary.

Checking Cat out, I can't say I was too surprised to read:

I’ve presented for the World Service, and written for Vice, The Observer, New Statesman and blogged for the Huffington Post.

Of course she has. And of course Ian Katz is a fan. (If it turned out she'd written for Breitbart I'd probably have had a heart attack from sheer shock!)
Posted by Craig at 18:09