Blogs are personal, We write about what interests us. You don't have to pay a licence fee to us. If some things obsess us more than others, you're not put out of pocket by that fact.

That thought sprung to mind again today because both From Our Own Correspondent on Radio 4 and Dateline London on the BBC News Channel (broadcast concurrently) focused on Israel and the Palestinians yet again. (FOOC even led with it, for the second week running).

It's clearly what interests/obsesses them, as it does us. You, however, have to pay your licence fee to them though - and that's one big difference. Our obsession comes free; theirs doesn't.

Plus, they are mean't (and charter-bound) to be impartial, and we aren't - which is the other big difference.

It's only a week or so ago that I was moaning that both FOOC and Dateline were obsessing again about Israel - and yet, one week (or so) on, here were are again, repeating that point.

Today's Dateline certainly wasn't exactly a beacon of impartiality on the issue (to use British understatement).

Its central discussion focused on Benjamin Netanyahu's remarks about the Palestinian pro-Nazi Grand Mufti, Amin al-Husseini - remarks that have brought down a huge amount on bile on the Israeli prime minister.

According to Dateline's account, Mr Netanyahu's original remarks seemed to suggest that Hitler was merely thinking of expelling the Jews from Europe until the Palestinian leader met him and told him to 'burn' them instead. In other words, the Holocaust was provoked by the Palestinian Grand Mufti.

All the Dateline guests (Yasmin Alibhai Brown, Stephanie Baker, Thomas Kielinger, Diane Wei Liang) piled in to criticise the Israeli PM, accusing him of all manner of wickedness. Presenter Gavin Esler didn't just not counter them, he actively joined them in their tut-tutting, not once playing 'devil's advocate' in Bibi's defence.

(Please watch it and you'll see for yourself that I'm not exaggerating much).

Now I'm no expert in this field (to put it mildly), but I've read quite a bit about this over the past few days. I've read plenty of articles, blogposts and comments denouncing Benjamin Netanyahu. I've also read some articles, blogposts and comments defending Benjamin Netanyahu. I've been torn between them. Some of the condemnation has come from surprising places (places I trust) and some of the defences have seemed rather too slippery. As a result I've arrived at my own conclusions, not favourable (in this instance) to the Israeli prime minister. 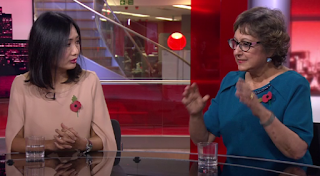 However, Dateline viewers would have no such opportunity to form their own opinions. Only one opinion was on offer. No defender of Mr Netanyahu was on hand. Everyone damned him.

I think that's a shame, and I can't see how that conforms to BBC notions of impartiality. (I don't even think the rare absence of Abdel Bari Atwan helped here.)

The one completely surprising thing was that Yasmin AB, halfway through her usual drivel, said:


A lot of Palestinians, a lot of Arabs are indeed anti-Semitic. I know because they even tell me.

That's quite something from Yasmin (who can occasionally surprise the viewer).

Can you guess what her next word was though? I bet you can. (Clue: It starts with the letter 'B' and rhymes with 'gut').
Posted by Craig at 18:16