Although the migrant crisis seems, strangely, to have receded from the forefront of BBC News (for whatever reason), articles about it are still intermittently appearing on the BBC News website.


Among such pieces is the latest BBC magazine article from one of the key figures in the BBC's reporting: their Central Europe correspondent Nick Thorpe, whose reports from Hungary have earned him plaudits (from pro-mass migration types) and brickbats (from BBC bias hunters - like me!).

Nick Thorpe's latest piece is headlined Politeness and eloquence on the road to Europe and the image below that headline exemplifies the kind of images the BBC has been using throughout the crisis (so far): 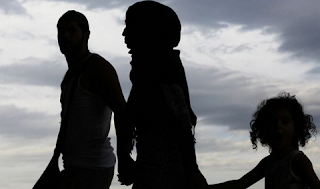 Yes, there's the completely unrepresentative yet heart-tugging image of a family: a husband, wife and young daughter.

Now, 'eloquence' is a word that could be applied to Nick Thorpe's writing. He's a stylish writer. And, having read quite a bit of his writing, past and present, I don't doubt that he's very well-meaning too.

Whether he's correct in his reading of events and whether he's anything close to being an unbiased BBC reporter remain very different matters though.

(Please check the links out for yourselves. They lay out evidence as to why he isn't on both counts).

As for this piece, well, it's certainly a stylish piece of writing. It makes a half-hearted play at balance but its heart is too obviously worn on its sleeve to be really considered balanced.

There's also the nice, fat Hungarian policeman - an unusual "representative of the repressive organs" - who mocks his own side as being Monty Python-like idiots (prompting Nick to think of them as 'peculiar...comedians' using tear gas. Their "antics" make Nick "weep".)

Nick himself is finding this "refugee drama...exhausting". He's got to report the "plight" of the refugees but also to report back the "fears and concerns" of Europeans. And to quote politicians.

[Copying and pasting this article reveals the caption for the next image at this stage in the article: "Hungarian policeman wearing a mask". Boo!]

Nick is also having endless dreams about the migrants. In those dreams he is prone to "challenge statesmen, quarrel with friends, and explain to migrants where they might be fingerprinted, and what that might mean".

In his reporting however, he says, he "gather(s) the tales of the host communities, too - both friendly, and hostile".

Cue nice 73-year old Pista who "stood at his garden gate offering his excellent home-made plum brandy to bemused Muslims, out of the kindness of his heart". (Aaahhh!)

Alone in his village, Illocska in Hungary, he argued that everyone should be allowed in, for as long as they need safety from the bullets. But when it is safe to go home, they should.

From the other side, it seems, comes an uncooperative Christian bishop:

A Catholic bishop forbade me from filming the frescoes in one of his churches, which portrayed a victory of Christian armies against the Ottoman Turks in the 15th Century. "It's too sensitive," his assistant told me. "The Bishops' Council is deeply divided over the refugee issue."

Then it's straight back to the 'good guys' who welcome the migrants:

A young German idealist stood greeting each new arrival in turn at Roszke, beside the famous railway track from Serbia, with the words: "Salaam Alaikum, would you like a sandwich?" He left no space for the refrain: "Alaikum salaam."

Still, Nick then presents the other side again, this time from "a friend":

An Indian friend told me the refugees are referred to, in Hindi slang, as kabutar - or pigeons. The word in this context means something like "opportunists" or "scavengers". If I was fleeing war, Rohini told me, "I would stay with people of my own culture, as near as I could to my own country."

However, Nick counters that with an emotive anecdote:

And I thought of the young Syrian tattoo artist who told me he had worked for a year in Istanbul, but was unhappy with the wages - $1,000 a month, so had joined the exodus to Germany. What birds will he tattoo on those bulging Teutonic biceps, those gentle Germanic thighs? And who has the right to say to him: "Go home to your own ruins"?

....and follows that with another:

"What are you asking for, from the people of Europe?" I asked a man from Gao, in Mali, in the Hungarian dust before the weather turned to autumn? "Seulement ta pitie," he replied. "Just your pity."

An image that copying and pasting reveals as saying 'The "sovereign man", supported here by two companions' then leads us to yet another emotive anecdote (the third in Nick's closing triptych) - and it features the heart-tugging figure of a disabled Syrian man, and a final moral:

At first light, a Syrian man in a suit stained dark with sweat, still wearing his tie, swung down the railway track towards me on his crutches. And who are you? I asked wearily, like so many Europeans. "I am, Sir, a sovereign man," he replied. Among so many sovereign nations, it was a relief to meet a sovereign man.

The moral? Apparently: Let us value sovereign individuals rather than sovereign nations.

It's beautifully written but it's also deeply biased, isn't it?
Posted by Craig at 22:00