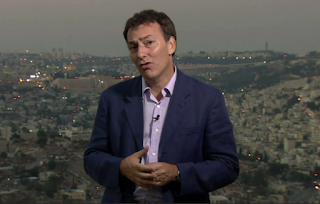 Despite admitting to not having paid much attention to the Israeli-Palestinian conflict in the last few years, Mark Urban expressed his take on the causes of the present violence with remarkable confidence last night:

I think many of us had sort of forgotten about the Israeli-Palestinian conflict during the last few years mainly because events were going on of such intensity in Syria, Libya and other parts of the Middle East that they just tended to overshadow this long-running conflict.

And, indeed, some on the right of Israeli politics used those events to say that now was not the time to engage in any meaningful transfer of territory or sovereignty to the Palestinians - the so-called 'two-state solution' in which this long-disputed land might be divided.

But what's become clear in the past year is that having no peace process ongoing, no hope from a Palestinian point of view of overcoming the occupation, does actually lead to profound instability.

And that's what we've seen breaking out into the open in recent weeks.

That struck me as a remarkably one-sided view of things - blaming Israel, casting the Palestinians as the victims.

Was it typical of his report as a whole?

It began by showing Muslim worshippers being searched by Israeli police on the way into Friday prayers.

Mark Urban said that there's always been "a political dimension" to events here, "with Israel claiming Jerusalem for its capital", but it's also "steeped in religion" and that, in recent weeks, "it's the sense that Islam's holy sites are in danger that has galvanised Palestinians".

(Curiously, he didn't note that that "sense" has no basis in reality).

Mark then said that "one of the notable things" about the recent violence is that "so much of it seems to have come from individual decisions", not from Palestinian (specifically Hamas) incitement.

(The question of whether the incitement from Hamas, Fatah [including President Abbas] and various imams has significantly fuelled those 'individual decisions', as many have argued, was thus dismissed...and further dismissed by having the following 'talking head' dismiss it too...)

Palestinian leader Dr Mustafa Barghouti appeared (the first of the report's 'talking heads'.) He agreed with Mark's point, saying that the "uprising" has "a spontaneous nature". He blamed "oppression" and "occupation" for what's happening.

(Dr Barghouti is one of the BBC's go-to people on the Israeli-Palestinian conflict. His loathing of Israel is only partly disguised by his slightly more liberal manner - at least as compared with other Palestinian spokesmen. He always denounces Israel though).

"There are elements of religious hatred on both sides of this", Mark continued...

...(engaging in a classic case of 'moral equivalence')...

...reporting on the attack on the Jewish shrine of Joseph's Tomb in Nablus. "At other times settler violence towards Arab neighbours has been the driver".

(The examples used to bolster this case of moral equivalence juxtapose an act of violence against a building from the Palestinian side versus acts of violence against people {neighbours} from the Israeli settler side. Curiously none of the many recent terrorist attacks in Jerusalem got a mention here).

Israeli writer Ari Shavit, author of My Promised Land: The Triumph and Tragedy of Israel, was Mark's second 'talking head'.

(Mr Shavit is another of the BBC's go-to people on the Israeli-Palestinian conflict. He's a senior writer for Ha'aretz and a left-liberal Israeli voice. He is often critical of the Israeli government. Here he largely stuck to general points). 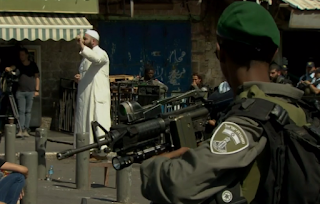 A clip of "a fiery sermon" - a bearded Muslim preacher ranting behind a got-totting Israeli policeman - was then shown.

(Quite what he was saying we weren't told).

The Israelis, Mark continued, "swamped" the area with police, only allowing older men and women into Friday prayers and "effectively kettling" the young men outside. "We noticed though that the police also held back orthodox Jews, anxious to separate the religions", he added.

(Good on Mark Urban for pointing that out! I'm not sure some of his colleagues would have done).

"Many have seen enough incitement recently to know religious violence could consume them, leaders and all, he continued".

Dr Mustafa Barghouti returned and agreed with Mark's question to him asking whether Fatah and Hamas will want to "catch this wave of violence" whilst also "fearing it".

(His reply did little more than repeat the question as an answer. Both question and answer amplified the point made in their earlier discussion - that Fatah and Hamas are not responsible for the present surge in extreme violence).

Then (inevitably) it was onto Jewish settlements and Israeli's 'responsibility':

Israel has faced much criticism globally for building more homes on occupied territory and its leader for apparently giving up on the two-state solution during the last election, but he insists he is really for immediate talks.

(The use of the word "insists" there suggests an element of doubt about it. And a clip of Benjamin Netanyahu's reply to his colleague Lyse Doucet was played - minus Lyse herself, or Mr Netanyahu's put-down of her.)

Then came an example of incitement...

Undermining any dialogue though is material like this showing a 13-year-old Palestinian being taunted by passers-by after being injured attacking an Israeli teen. Shared by the angry on social media it makes solutions that much harder.

It was then back to Ari Shavit of Ha'aretz to say that, though not a religious man, he really prays that such events will "wake" everyone up: "It's time for all of us to understand that we have been deeply irresponsible in dealing with this horrible, deep tragedy."

(At least Mr Shavit did provide a bit more information on that attack when he said: "When you see 13-year-old boys trying to murder other 13-year-old boys...it’s time for all of us to wake up.")

Mark Urban then noted that though there'd been no significant violence in Jerusalem that day, "four Palestinians were killed in the West Bank and Gaza...

...(without giving any details - such as that one of those was disguised as a journalist and tried to stab an Israeli soldier - which suggests they weren't all 'killed' by Israel as innocents).

And all on the day the UN meets to try and drive "a concerted effort to stop it", Mark ended.

As you can tell, this report struck me as poor - surprisingly so, given that Mark Urban is a fine reporter.

Maybe he should have been watching more closely over the last few years after all.
Posted by Craig at 12:47