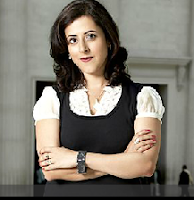 Oh dear, I seem to be turning into a politician!

I promised not to keep banging on about Anita Anand on Any Answers, lest I bore you to death with repetition, but, alas, it's time for a u-turn...

Please imagine you're studying English Comprehension (if such a subject still exists) for your A-level (or A-level equivalent). The question on your exam paper might read: "Examine the following statement. What side of the argument do you think the speaker is on?":

So what did you make of the Home Secretary Theresa May's speech on immigration this week? What did it do for community cohesion do you think? Was she saying what you're thinking or was she stoking racial tension in her positioning as a potential leader?

My answer (and I'll show my working) is that the speaker, Anita Anand, wasn't on Theresa May's side but was betraying a strong pro-immigration bias instead. Why? Well:

(1) Because her first angle on the Home Secretary's speech was to worry about community cohesion - always the main concern of politically correct types across the British Establishment (from politicians and the police to social work administrators and the BBC), as shown by the backside-covering cover-ups in Rotherham, Rochdale, Oxford, etc, etc.

(2) Because of her deliberate use of an old 2005 Conservative Party election slogan ("Are you thinking what we're thinking?") that has become a favourite on the Left as 'proof' of the failure of Tory 'dog whistle politics' to win elections (given that the Conservatives were assumed - rightly - to be talking about immigration yet still lost that election [to the election-winning Tony Blair]).

(3) Because of her 'double whammy' final clause, combining "stoking racial tension" with "positioning as a potential leader" - implying that Mrs May's comment were both wicked and cynical.

Personally, were I marking myself there (like the BBC Complaints department), I'd give my answer a glowing 'Fully upheld'.

Actually, that wasn't the end of Anita's introduction. And if you think the above was outlandishly biased, then get a load of what came next:

Perhaps you thought she was evoking the ghost of Powell when she should have been evoking the spirit of the Great British Bake Off? Do get in touch and let me know.

If that's impartial broadcasting then I'm Theresa May.